This is the fifth blog in the Collecting Real Utopias series, which aims to collect, connect, and celebrate arts-based real utopian projects from around the world. It is rooted in my research, which explores the overlaps between democracy, environmental justice, and participatory arts. To learn more about what is meant by ‘real utopias’ and the overall ambitions for this series, please have a look at my first blog.

As the last blog spoke of growing food, it makes sense that this one should speak of eating it.

Nostalgia is a strange and powerful thing – melancholy, sweet, and yearning. It is physical, and mostly unnameable. Wrapped up in smells, food, songs, Instagram filters, as well as stories and people. Nostalgia is often thought to be about the past, but I would like to suggest that it also has a role to play within thinking about the future and utopias. This is apparent in the real utopias I have already spoken of in this blog series: many make use of ancient practices and inherited traditions as a counter to contemporary exploitative capitalism. Legislative Theatre uses a democratic ‘forum’ evocative of a kind of idealised version of early Athenian democracy. The Soul Fire Farm draws from a broad range of ancient religious traditions to build reciprocal and meaningful relationships with the land and between the farmers. These evocations of the past are important to the ways in which these practices try to embody alternative futures. They give us something to hold on to, and an emotional relationship with a vision which is still emerging.

The power held within nostalgia is used on all points on the political spectrum. It must be acknowledged that nostalgia is very often used by the right to dog whistle racist, imperialist, and patriarchal visions of ‘simpler times’ when Britain was ‘Great’. Something vaguely placed around the world wars when we all* (*white people) harmoniously ate victoria sponge on union jack tablecloths and knew our place. Like many nostalgic images, this is a fictional past – but it’s realness is not it’s power. Indeed, it is within its vagueness that it finds power as it means that this imagined past can be something personal for everyone.

I would argue that this use of nostalgia does not discredit nostalgia itself – we should not blame the tools which build a repugnant monument. And, as discussed above, evocations of nostalgia are also important to building real utopias.

Perhaps there is something in this longing for a fantastical past that never existed, which are longings for an alternative to the present. Nostalgia is linked to a longing for a sense of belonging, or a home. Svetlana Boym defines it as “a longing for a home that no longer exists or has never existed. Nostalgia is a sentiment of loss and displacement, but it is also a romance with one’s own fantasy.” (Nostalgia and It’s Discontents, 2007). I would argue that these qualities of nostalgia also emphasise its power in re-imagining the future. Can this longing for a different time and place take us forwards rather than back?

In light of this, I have been experimenting with the creation of democratic space through potlucks, which hold a great deal of nostalgia for me. I hosted the first of a series of potlucks I’ll be creating with Artsadmin in early September as part of What Shall We Build Here Festival. In this blog I’ll be unpicking some of the ways that I think potlucks can offer some very tiny real utopias by creating useful and joyful democratic spaces.

Potlucks were a big part of my rural Canadian childhood. Because my memories are hazy, I’m certain I idealise them. This history gives me a strong nostalgic pull to the smell of bonfires, the fiddle, full moons, and cold pasta salad. The lockdowns of the past 18 months have perhaps given this nostalgia a special power. I’ve had an almost physical longing for the conviviality and informality of tables lined with plates of food shared with a room full of friends and strangers. And these reminiscences also allowed me to make a connection between these events and questions I’ve been asking myself about democratic spaces and real utopias: how can we create a space which is truly collectively owned? Which is, just a little bit, hosted by everyone? Could potlucks be their own tiny real utopias – which allow for this sense of collectivity?

As part of my residency with Artsadmin, I’m seeking some answers to these questions and one way is through a series of themed potlucks. The first was (aptly for this series) themed around ‘utopias’ and invited a group of artists, academics, and activists together to share a meal and offer some thoughts on how utopias feature in their work and lives. Given the ongoing pandemic, numbers were very limited, and we did not ask guests to bring food, but rather suggest an ingredient which means something to them. From combining this list of ingredients, we created a delicious feast. This approach harks back to the origins of the potluck, where guests would bring something ‘for the pot’, rather than their own complete dish. Some guests were also invited to host small parts of the evening, such as a welcoming ritual, toasts, a poem, and even a short participatory performance.

The evening began quietly, tentatively, awkwardly. We are out of practice with live events, and the logistics of masks and social distancing makes it harder. The artist Jennifer Farmer began the evening with a greeting ritual around gifting, imagination, and care – ‘if we were able to bring a gift to this potluck, what would they be?’ Artist Mohammad Rahman then offered us the first toast of the evening, a reading of a poem by Khalil Gibran about children and what we leave behind after we die. “Your children are not your children. They are the sons and daughters of life’s longing for itself… Their soul’s dwell in the house of tomorrow…” Mohammad then offered this toast: “I toast to all the futures we don’t know yet. And to uncertainty and the re-ordering of things.” And then the meal was served.

The serving of food, the trading of dishes, the yums, and ‘oh I don’t have any salad!’ helped to break-down of the formality of the event. Conversations strayed from utopias and into our lives, our days. The ritual of eating and sharing food disrupted the feeling of being within a workspace and brought us into a more social space. But time was short and too soon plates were cleared and the second toast of the night brought us back to the question at hand. I clinked on a glass with a fork and the political economist Will Davies offered some of his thinking about the future within financial systems and literary utopias: “literary fictions can become blueprints, and those blueprints can become realities”. He ended his essay reading with this toast “To the overturning of risk models in the financial sector!” And dessert was served.

At this point everyone naturally shifted around, seeking out those they wanted to connect with – ‘is that my wine or yours?’ – people perched on the edges of tables with apple cake in hand, more drinks were sought from the bar. And again the glass was clinked and playwright and activist April de Angelis offered us some stories about the connections she has formed with strangers during her work with Extinction Rebellion, and the utopian ideas which emerge from chaos: “these encounters, these interruptions, are perhaps the only taste of real utopias I’ve ever had. So – to Extinction Rebellion.” And hot chocolate appeared and some of us added a dram.

The night ended with a short participatory play reading facilitated by artist and dramaturg Zoë Svendsen. In coincidental symmetry to the greeting ritual, this piece was themed around giving thanks and imagination. We invented small parts of the story and each read a card, which took this imagined future world further. The final card read: “Let us thank the earth which bore fruit, any animal that died so that we could eat, the people who planted, farmed and harvested our food. Let us thank those who transported it, and those who sold it to us. Those that shopped for it, combined, and cooked it, and placed it here before us on our plates. May you be safe, may you be healthy, may you be at ease, may you be glad.” And then we all clapped a lot. Various voices raised new subjects for our clapping. We clapped each other, and Lil Woods (who served the drinks) and Lily Peck (who, with me, cooked the food). And then we stayed for another drink, entirely forgot we were ‘supposed’ to discuss utopias, sought out our acquaintances in the room, and rushed off for trains, and said hello and goodbye to everyone.

This approach to creating a democratic space has great potential, but it’s not there yet. This event was not ‘a little bit hosted by everyone’, as I hope it could one day be. It was facilitated and pushed along by me and the limited time (and my own fear of letting go) meant it was very structured. Whilst there was conviviality, there was a recurring formality necessitated by the circumstances of the pandemic, and by its situation within a festival. But there is room for adjustment and experimentation going forwards. This is where the ‘utopia’ and ‘real’ come up against one another. All of the other projects I have discussed in this series have been the work of others, many are projects I have not even directly witnessed or participated within. I have written of their values, ideals, and successes as this is a space for solidarity and optimism. Of course, this does not mean that they are not flawed. Can we learn from these flaws? Can we use our utopian impulses and our nostalgic yearnings to make our realities a bit more like our visions? Perhaps the real utopian nature of the potluck is not contained within one event, but in the idea of this as a methodology for a democratic space. It is in its refinement and future usage.

I will be organising another potluck in the new year, with a new theme, and a (mostly) new collection of people.  Overall, this series is an investigation into creating joyful and imaginative democratic spaces. I hope that this methodology, once refined, will be useful for others within multiple contexts, such as research/evaluative practices, citizens assemblies, community meetings, and artistic projects. If anyone has ideas on this work, or an interest in joining us for future potlucks, please do get in touch on malaika@artsadmin.co.uk. 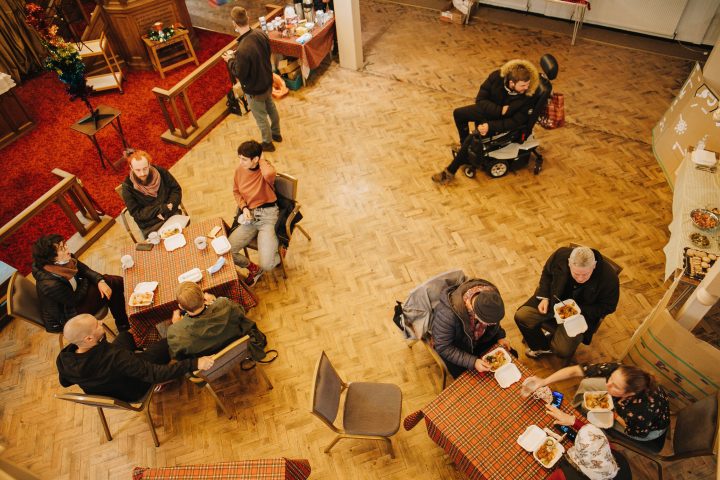 Dr Malaika Cunningham (she/her) is in residence with Artsadmin from February 2021 until summer 2023 as our Practice-based Researcher. During this time, she is using her background in both social science and performance to performance and democratic spaces,