To Part and Return

Artists' talk and presentation Friday 6 March, 5pm
To Part and Return is the next in a series of screen-based artworks by artist Lucia King, which unpack the many dimensions of what it means to perform. Exploring the sensual, physical and transitional states of being a performer King reveals the place between the role and the real.
The film captures dancer and stage director Vinay Kumar within the sub-tropical landscape in South India where his dance/theatre company Adishakti is based. Flowing seamlessly from his daily preparatory tasks into the intensity of a performance, a parallel story – an allegory of separation and return to an object of devotion – subtlety unfolds.
Kumar’s devotion becomes both his connection with his practice and to an absent partner who appears fleetingly amidst the daily action.
A consummate performer, Kumar’s practice combines South Indian martial arts training with epic dance-theatre and percussion, creating a contemporary and hybrid performance language of its own.
2008-9 duration 22 mins © Lucia King/ Adishakt
Concept, script, camera & editing: Lucia King
Sound: Suresh Kaliyath, Arjun Shankar
Performer: Vinay Kumar Supporting performer: Nimmy Raphel
Production support: Adishakti administration, India
Supported by the National Lottery through Arts Council England, East 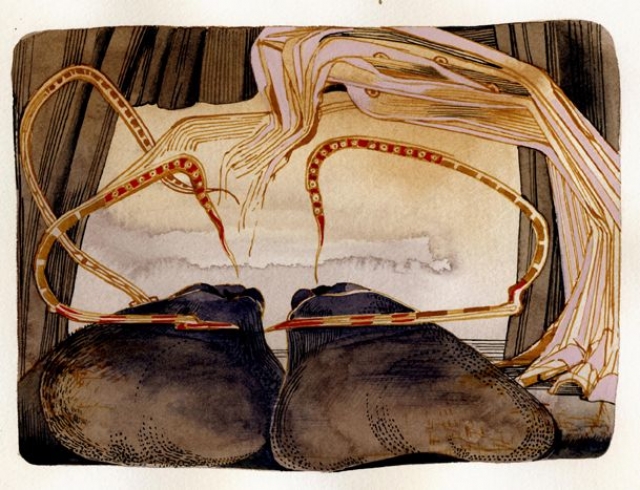 Drawing underscores Lucia King’s practice in performance, theatre and film, and her work has also appeared in