vPPR, a new architecture practice based in London, is excited to present Survey, a group exhibition of sixteen international contemporary artists at a pop-up art space, Ott’s Timber Yard, located next to Tufnell Park Tube
Station. Functioning as a joinery workshop for the past fifty years, the recently voided site calls for a Survey – both of the existing buildings on the property and of art now. The artworks will respond to the spatial character of the site through sculpture, installation, photography and video, and address its labyrinthine architecture in contrasting ways, from monumental site-specific structures to ephemeral interventions.The works will be displayed along side traces of previous inhabitation – shelving racks, pin-ups, newspaper clippings – and are curated together as a single journey, deliberately interweaving content and context, the informal and the vernacular.
Significantly the exhibition is a precusor for radical transformation: it marks a transitional moment for the old studios which will soon after be demolished to make way for a new architectural intervention. Anthony and Alice’s film series, “Architectonics,” construct imaginary places out of domestic paraphenalia, recalling childhood dens and forts. William Cobbing will show a new film, “Moon walker,” featuring the artist furtively clearing his tracks, as if rewinding the entropic dispersal of a beach, in reference to Robert Smithson. Lorrice Douglas will show sections of “Room sized set,” illuminated photographs made to exact scale in reconstruction of an architectural interior. Marcus Foster’s work will seek to create its own imaginary “place”, waiting to be discovered and activated, within the abandoned wood yard. Rose Gibbs will exhibit small sculptures of women, which she hopes are humorous. Lee Grandjean will re-occupy the space with a character, “Flora” that perches between bar-stool boredom and biological decomposition. Zarah Hunt will install a sound work that deals with non-place, featuring a recording during a tour to the Hoover Dam near Las Vegas. Wijnand de Jonge will exhibit two
contrasting minimal rectangular forms- one of steel and the other of cast concrete, bearing the imprint of wooden planks found at the site- whose raw materials and transparency of construction reference the previous occupation
of the site as timber yard. Patricia Lennox-Boyd will show a recording of “A Potential Structure,” a performance of two females who construct and dismantle a number of different structures in breezeblocks, in configurations
that recall Minimalist serial sculpture. Colombe Marcasiano will exhibit provisonal assemblies of tools made from painted cardboard that have a special resonance to the history of the site. James McCann will show “Bastard Diagrams” made from fragments of mellamine MDF crudely welded together which sit precariously against walls, unable to hold themselves up. Sahra Motalebi will show “Such is the Game of Authenticity.” Sally Reynolds
will exhibit a sculptural work, “Cortex,” that consists of three bronze elements, cast from lumps of wet clay showing the trace of tactile marks and gestures, to investigate concepts of the formless. vPPR will contribute an architectural work that investigates the form of the real site through maquettes. Jordan Wolfson will have a sound work installed in a tree above the building.
Film Survey is an evening screening of a range of historical and contemporary works which will further address the space, time and architecture of the Timber Yard. 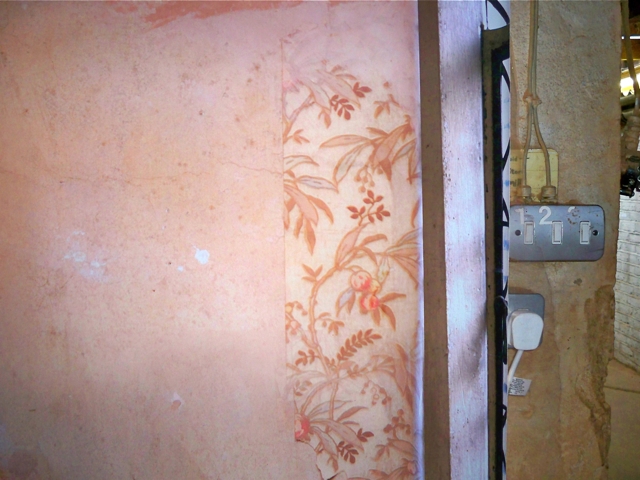