Michael Pinsky’s public art work Plunge, currently on show on three monuments in Central London, imagines a time 1,000 years in the future when the effects of runaway climate change have led to a sea level rise of 28 metres, completely transforming London and the world. How can we avoid this predicted future, and globally combat climate change and environmental damage? This discussion will look at which areas of influence might have the greatest effect – art, religion, law or politics.

Michael Pinsky will be joined for a discussion chaired by Charlie Kronick, Senior Policy Advisor at Greenpeace UK, by guests including Dr Giles Fraser, former Canon Chancellor of St Paul’s Cathedral, and Joe Hall, head of campaign for Eradicating Ecocide.

Dr Giles Fraser was Canon Chancellor of St Paul’s Cathedral from 2009 until his resignation in October 2011 in protest at plans to forcibly remove Occupy protesters from its steps. As Canon Chancellor, he fulfilled the role of a canon residentiary with special responsibility for contemporary ethics and engagement with the City of London.

Joe Hall is Head of Campaigns for Eradicating Ecocide, campaigning for an international law of Ecocide which would make CEOs and our Heads of State legally responsible for the Earth.

Charlie Kronick has been active in the area of environment and development for most of the past 20 years; for the past decade he has lead the climate change team and policy work at Greenpeace as well as other work focusing on investment in capital markets in London, Europe and around the world. For much of that time, he has also been the Chair of Cape Farewell and is currently a trustee of Platform.

Michael Pinsky is an artist whose international projects have created innovative and challenging works in galleries and public spaces. He created Plunge in response to a commission for a public climate change project by LIFT and Artsadmin.

Caroline Russell practiced as an artist for ten years until 1993, when she re-trained as a civil engineer. For the last twelve years she has campaigned in Islington and across London for more people-friendly streets, a less traffic dominated public realm and for road danger reduction.  She joined the Green Party in 2009 and is a candidate for the London Assembly in May.

Plunge has been created by Michael Pinsky and produced by Artsadmin and LIFT as part of the Imagine 2020 network programme. Supported by the National Lottery through Arts Council England, the European Culture Programme, Trust Greenbelt, WWF-UK and the Big Give. In partnership with Royal Parks, Seven Dials Trust and Paternoster Square Management Limited. 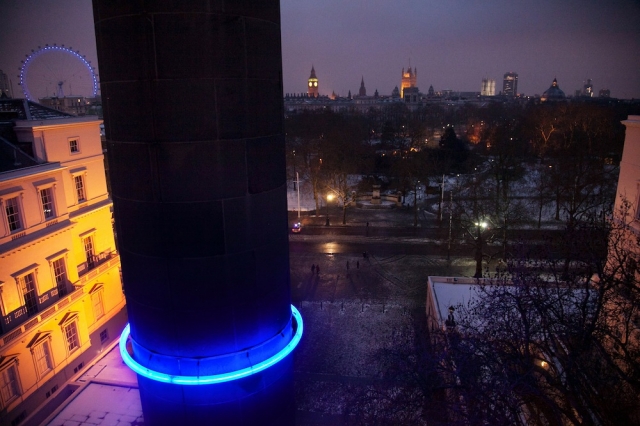 Plunge is a simple, elegant statement placed on a network of iconic columns. A string of low energy…