Bassline is a ‘city-specific’ large-scale sound and video installation that is recreated for specific spaces, in which a series of projections reveal the surrounding urban landscape as seen by a chain of 10-15 walkers and a bass player.

The exposure of a line of individual walkers to their passing landscape produces a panoptic trace of the City in time. Bassline is a record of this captured material that is unique to the location, to the people walking and to the time in which it has taken place. Audiences see and hear the recorded testimonies of an hour-long walk made by the participants accompanied by a solo bass line.

The piece reveals participants’ memories, associations and perceptions of the area, capturing its unseen characteristics. Bassline is a formal exposition of momentary perception and layered meaning in the urban environment.

Bassline: Vienna took place in a 200-metre access tunnel between two underground stations just beneath the pavements of Mariahilfer Strasse in Vienna. On 3rd April 2004, eleven participants ranging in age from 7 to 90 followed British bassist Tim Harries on a 50-minute walk through the city, starting and ending in the tunnel. The verbal accounts of this walk gathered on the day, and the edited video record of their journey, were then mounted in an installation for 11 video screens and 12 loudspeakers. The voices and images were effectively underscored by Harries’ musical account of the journey, creating a psychological map of Vienna and revealing the city as a tissue of thought.

“…Graeme Miller has gathered the mundane from street life and brought it to a dark place, where – lit and directed – it mysteriously gleams and glitters; an enrapturing experience of the city not just for Underground passengers.”

Bassline: Vienna was commissioned by Wiener Festwochen 2004 and took place at U3 Neubaugasse station in May 2004. 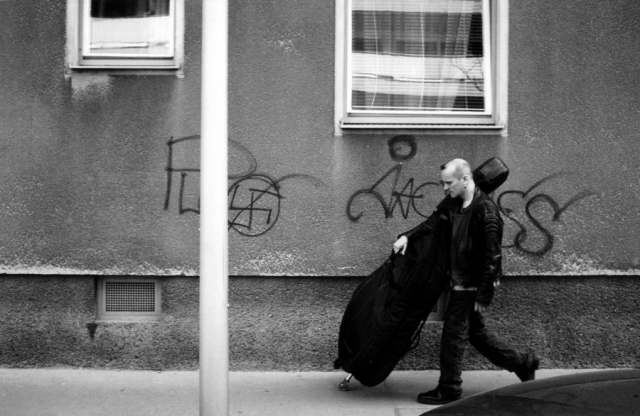