Passage for Par is a site-specific performance for 30 women, which was originally created for and presented on Par Sands and commissioned by CAST for Groundwork 2018.

Rosemary brought together an international cast with a diverse range of experience, combining Cornwall-based dancers and students from Falmouth University with performers from further afield. Developed on location over an intensive two-week period, the resulting performance slowly and rhythmically snaked across the magical beach at low tide over two hours.

This mesmeric work can be developed for other coastal sites. Taking the concept of 30 women hand in hand inching across the land together, she can create bespoke performances for each site, changing the title for each iteration – Passage for…

The audience are invited to follow the hypnotic movement of the group from afar, witnessing the image of the womens’ meandering pathways, their steps creating moiré like patterning. As they are drawn into the performance their perception of time and of the expansive seascape alters and shifts with the women.

“…encapsulates the synergy between site and artwork… For two hours, the audience… remained mesmerised by the collective display of inner and outer unity — not a foot could falter or all would collapse like dominoes.”

“…poetry in slow motion. It’s a centipede on tip toes. An umbilical slinky, eddying its way towards us, summoning every last lug and rag-worm to the surface with the mud-thud of 60 delicate feet in black boots…. Portrayal of patience? Migrant metaphor? An assertion in choreographic restraint? There are so many ways to feel about this ‘wonderwork’.”

“In seeing their calm effort from so far it was as though you could hear them breathe… It felt like watching a moving work of art, an early morning elixir, a soothing balm, an invitation to reflect on the passage of time and journeying.”

Passage for Par was commissioned by CAST (Cornubian Arts & Science Trust) for Groundwork, a season of international art in Cornwall from May to September 2018. Produced by Dance Republic 2 in association with Artsadmin.

For more information on this project contact Nicky Childs at nicky@artsadmin.co.uk. 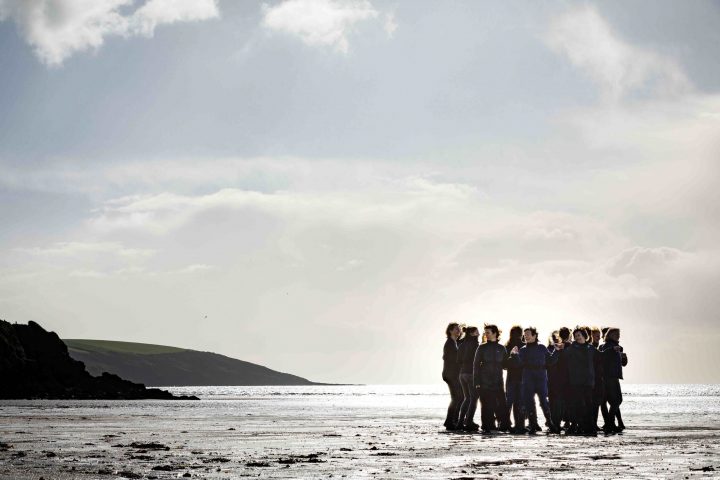