Since 2014 Rosemary Lee and Simon Whitehead have been developing their collaboration on Calling Tree. Located in and around a mature tree in a significant site, and working with a team of aerialists, singers and performers they have created a durational performance made up of cycles of songs, movement and messages.

Bird-like calls, songs and messages echo out from the trees’ canopy and surroundings as performers continually appear and disappear fluctuating between restful perching to passionate vocal and physical activity.

Rosemary and Simon have to date presented three manifestations of the project. Originally commissioned by Migrations, they created the first Calling Tree in 2014 for a mature oak tree in the heart Betws y Coed, North Wales. Four performers animated the oak for six hours. Differing cycles of songs, movement, messages and greetings in Welsh and English were created especially for morning, afternoon and evening. They then went on to develop the project further for two London locations, presenting Calling Tree in Tottenham during LIFT 2016. In the huge boughs of the 500 year old Great Oak in Bruce Castle Park the 4 performers danced, sang, called and whispered to the audience, under the” canopy a group of young singers gathered to sing a newly commissioned song. Calling Tree in Bloomsbury, presented by The Place & Bloomsbury Festival, took place in and around the elegant London Plane trees of St George’s Gardens. In the autumnal dusk, the performers created a sonic field that flooded through the garden, whilst the dancers slowly ascended and descended the tall trees. A further iteration was made for DNA Festival in Pamplona in 2018.

Each was a bespoke response to the trees themselves, their unique site and to the communities – human and otherwise which share the trees’ environment. Reaching out to the surrounding neighbourhoods, an associated programme of activities was also developed with the local people and woven into the daily performances. Using the tree as a gathering point, these ranged from performances by a community choir; spoken word and dance events; local history & nature walks; talks with artists, ecologists and bird specialists.

Calling Tree is an on-going project that Rosemary and Simon can adapt and develop according to new contexts and locations. Whilst always keeping its distinctive quality and features, new manifestations can range in scale and focus from one itinerant lone performer and ladder calling from the trees across a city, a sound installation whispering from the branches to a performance involving several performers inhabiting a sentinel tree and surroundings.

A gentle yet powerful act of reclamation and activism Calling Tree is designed to encourage us to look up and be attentive to ourselves and our environment; reframing our relationship with the natural world. The tree acts as a catalyst to bring people together, celebrating the rich diversity of the area.

“Left me with a sense of hope. I had the feeling of being washed through, and at the end was on the brink of tears, not of sadness, but of joy and delight.”

“This beautiful, moving, human and so much more than human happening. Beauty, connection, soul, song and silence what a feast!”

“The performance was a beautiful evocation of the community…”

“It touched a need to share and return to a notion of connection to nature that seems to be retrograde in this ever so sophisticated urban 21st century.”

“I experienced Calling Tree as an oasis of calm, purposeful creative endeavour in the city.”

“I left calm, reinforced and uplifted.”

“What I loved most about this work was the subtlety of the choreography and how that term embraced not just a tree, but a whole park and community.” 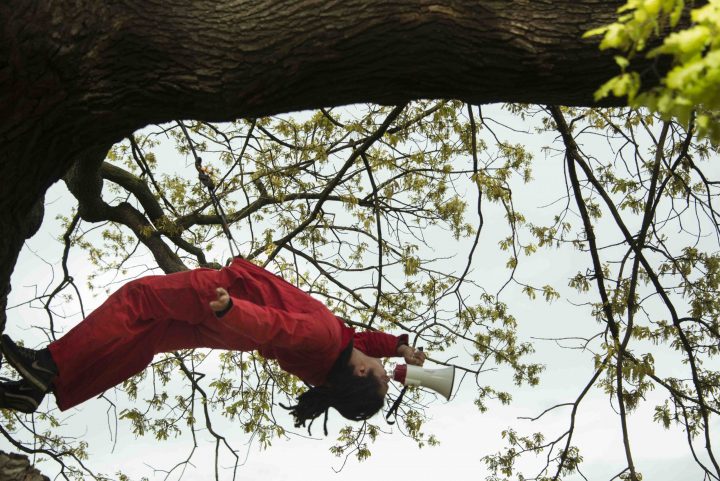