Gathering in a public space, often under the expansive branches of a huge tree, a group of men of varied ages, raise their arms to the sky then slowly, almost imperceptibly, ‘melt down’ to the ground.

A single bell toll marks each minute of the melt down, as countless images and thoughts of mortality, the passage of time, human strength and frailty, and the resilience of the human spirit pass through the viewers mind.

A deceptively simple yet powerful sculptural work, Rosemary reworks this idea for different contexts, incorporating a group of local professional and non-professional performers wherever she goes.

“Lee’s genius – and I use the word carefully – is to modulate and sculpt her choreography to the dancers before her with a simplicity that makes the movement seem wholly natural and life-enhancing, for participant and spectator alike… the performances that emerge are astounding.”

With thanks to Elise Long and Spoke the Hub Dancing Brooklyn, for inspiration and permission to work with Melt Down concept.

Melt Down was originally one of a quartet of short pieces performed in open spaces in central London that combined to make up Square Dances. First commissioned for Dance Umbrella, 2011 and recreated for Panorama Festival in Rio de Janeiro, Coastal Currents in Hastings, Tanz! Heilbronn in Germany and Bath Dance. 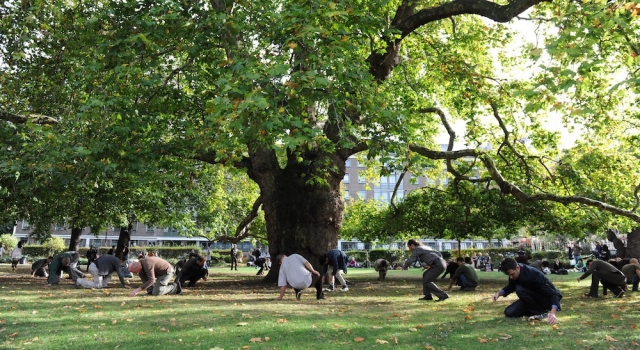 Gathering in a public space, often under the expansive branches of a huge tree, a group of men…