Text review: Julián is a Mermaid by Jessica Love

The Apocalypse Reading Room was at Toynbee Studios from 1 July – 30 September 2021 in the Arts Bar & Cafe. The installation was filled with books for all ages, exploring ways to build, transform, rethink, rewrite and reimagine our futures and  activated by two artists, Lateisha Davine Lovelace-Hanson and Mohammed Z Rahman, who were selected for a three-month long residency programme, a series of public events and writing blogs. This is a text review by Mohammed.

When I first landed in the Apocalypse Reading Room I was dazed by the glut of words on offer in the deceptively small corner. Hugging the edges, I started with the kiddy books- Giraffes Can’t Dance (1999) by Giles Andreae and Guy Parker-Rees recommended by Jessica at Artsadmin and Julián is a Mermaid (2018) by Jessica Love, recommended by my dear friend Han. Who knew they’d split my heart open like a bulb of red garlic. TL;DR: Get the damn book for the little (and big) ones in your life!

Julián is a Mermaid is a picture book about a gender non-conforming boy who dreams of being a mermaid and is unsure about whether his Abuela approves. The sprawling watercolours took me in, the familiarity of the bricks, trains, streets and melanin, brought to life in a bouquet of colour; Jessica Love is a virtuoso with the brush and pen. Reading it, I realised how I’m still taken aback by representations of queer Black and brown bodies in visual media, aware I’ve internalised a false sense of rarity- I pray to never feel this again in the world to come.

Jessica Love’s universe centres on the bond between Julián and Abuela, it lets us suspend our belief of the cruel realities of cisheteronormativity, for a world of care and love. In that way I read it as a map to guide us through the apocalypse. I saw myself in Julián, my sisters heartily obliging to paint my nails as a child, trying on theirs and my friends’ dresses, wearing them in private, feeling joy- something I still do. I’ve always felt most at home among the women in my family, a dynasty of mothers and sisters. Growing up there was no explicitly affirmed gender nonconformity or advocacy for non-binary gender expression, at best a kind of unspoken tolerance. It was through my accepted place in the kitchen at family functions, enthusiastic fashion chats when getting ready for weddings and avoiding the men’s room at all costs. In moments like this, I dreamt to flatten my differences with my aunts, my sisters, to look beautiful and feel joys in fabric, flowers and fantasy.

I think of the ways gender nonconformity were restricted and pressed out of me by the Gilead of binary gender expression in clothes shops, public bathrooms, at work, at the masjid, on TV, among my wider conservative family. What makes me continuously decide to factor in being intelligible to the binary? I wondered where this came from, was it the long history, the British Raj’s anti-sodomy laws that outlawed gender variance and sexual expression? A Section 28 mindset hanging like a bad fart in Tory Britain? Was it the imperialist slant on Islam mobilised by the West Pakistan government and the sexual violence which sought to flatten Bangladeshi nationhood? Was it the personal slights and twinges that have gone unprocessed in the community, the gut-wrenching attacks nobody speaks about? When did gender identity become such a site of violence in the community? Why does it persist between judgemental staring neighbours and the horror stories visibly GNC chosen family come home with?

I think part of the answer lies in those unwilling to suspend their belief, and I think that inability lies in pain and fear. I wonder where all of that pain comes from, where the thick taproot of fear plunges its hundred barbed offshoots, how to unhook it. I was recently introduced to For the Wild podcast by Lateisha and found the profoundly affirming, chilling and prophetic episode with Alok Vaid Menon hit many heads on many nails re: my feelings after reading Julián is a Mermaid:

“The way that  tokenisation has worked, is that it’s made the political ask know [trans and gender non-conforming folk], learn our pronouns, learn our knowledge, ok but that’s surface, the next ask is know yourself and that’s the work people won’t do. They’ll look at us… and they’ll exceptionalise us, but they won’t actually say, “wait, this must mean I must necessarily shift the way I conceive of my own self, of my own being,” and that is the spiritual work that is not being done.

The lack of that spiritual work being done is actually creating the conditions of violence for us. I know that the reason that they do violence to us is because they’ve done violence to themselves. I know, that the first perpetuation of gender-based violence is to the self, it is to cis-men who have divine femininity who seek to destroy and obliterate that in order to be read as legitimate men. Instead of saying “oh wow, this is possible” they have to destroy it because our existence calls into question their own performance art.”

Alok Vaid Menon on Unruly Beauty, For the Wild Podcast

Funny how deeply Julián is a Mermaid made me feel. It made me think of readings and the gender module I took during my anthropology degree at SOAS. How I studied the hard theory of Judith Butler, bell hooks and Anne Fausto-Sterling, how I pored over ethnography from across the continents; Les Back’s work on making racialised working-class masculinities visible in South London, Marlon M. Bailey on the Detroit ballroom scene as a space which accommodates gender nonconformity with its own codes of marginality, Afsaneh Najmabadi on transwomen, gender nonconforming folk and queers navigating the medical system in Iran, Don Kulick on travesti communities in Brazil taking agency over their bodies and joy, Amanda Lock Swarr on visibility and violence towards transmen, tomboys and lesbians in South Africa.

While I learnt a lot over years of reading theory and ethnography, a picture book with less than a side of A4 text was the only text that made me tear up like that. I think that speaks volumes on academia as a clumsy slow-burning front of political change that you come to in your twenties earliest, and the power of a picture book someone with milk teeth can absorb and use to craft their spirit.

A touching part of the plot that stuck with me is the moment of suspense when Julián can’t read Abuela’s “Oh!” at seeing him dressed as a mermaid and the following the scene where he reassesses his crafted look that was undeniably beautiful when nobody was looking. I thought a lot about Swarr’s ethnography and the simultaneous liberation and vulnerability that come with the increased visibility of GNC bodies, how much fear factors into the lack of participation in reimagining our bodies, how the onus of trans and GNC liberation is ultimately with those who uphold binaries and oppressive ways of being.

Initially my heart was warmed by Abuela’s return with a pearl necklace for Julián, and then I thought, while a beautiful, radical act of care, perhaps I put too much weight on Abuela’s action as an ally. I gave it some thought and concluded Julián having his vision to manifest his dream and adorn himself- that is the biggest radical feat of care in this book, both to Julián and to the reader. Julián dreams beyond reality to realise himself as a mermaid. It is an act of world building that on the one hand requires a deep knowledge of the way things are, and on the other loosens the chokehold of body policing for us all.

When Abuela came back with a necklace, the same tears pooled in my eyes as the ones that came up some years ago during the scene of Moonlight (2016), where the Chiron asks his father figure Juan:

“A word to make gay people feel bad about themselves.”

“No. You’re not a faggot. You can be gay, but you don’t have to let nobody call you a faggot.”

Like Abuela’s necklace, this scene is one of those rare representations of QTIBIPOC being seen by a caregiver, something dearly and unfortunately precious for me to see. It reminds me how I struggle to know what to do with the prospect of a world where oppressive gazes don’t exist, where tenderness and understanding prevail. It’s a terrifying and beautiful thing for me.

It marks me out as a responsible party, I wonder how the youts in my life will read my praise and silences. Having internalised so much, there’s no guaranteed way to sensitively talk about these things to kids. When I think of Trans liberation I think of the Stonewall riot, of the protests and vigils when Sophie Gwen Williams and Elie Che were killed by the systems in place. Books like Julián is a Mermaid are part of the revolutionary and artistic movement of care and advocacy that don’t need death, it sits alongside accessible healthcare and housing, supportive chosen family, teachers who listen, medical workers who care, abolition and the redistribution of wealth. We need to work towards a reality where trans and GNC liberation shouldn’t need death.

“When we just make the creation of life around reproduction around conception and pregnancy, we are losing the dynanicism and the artistry of what is to be alive and what it means to be in community with each other… Queers have always been involved in caretaking and in the creation of just, humane, ethical society- how dare [cisheteronormative society] dislodge us and say somehow we are not about the future or that we’re going to die out because we’re not caring about future generations… when in so many ways the things we are birthing and creating are making that future possible.”

Julián’s dreams are real. From imagining himself morphing into a mermaid on the train to dressing up, to joining the procession of mermaids. The dreams of trans and GNC youth are precious, they have always been key to imagining new futures and one of our best hopes at unfastening the toxic grasp advertising and white supremacist cishet notions of beauty have on us.

I wrote half of this in the only dress I own, a modest, twee and floral Laura Ashley number stolen from the wardrobe of my family home. I have never left the house in it, I take the patriarchal gaze and its threat of violence too seriously at the moment. If the world is going to end, I hope that goes down with it. Like Julián, I hope to join the procession of mermaids someday. We need to cement new ways of being in community and love with one another. We need to be strong enough to suspend our belief, to hold the new world in our minds before we cradle it in our arms.

You can still engage with The Apocalypse Reading Room online: Listen to recordings of talks with residency artists, Ama and invited guests on our Soundcloud.

The Apocalypse Reading Room project is supported by BE PART through the Creative Europe programme of the European Union. 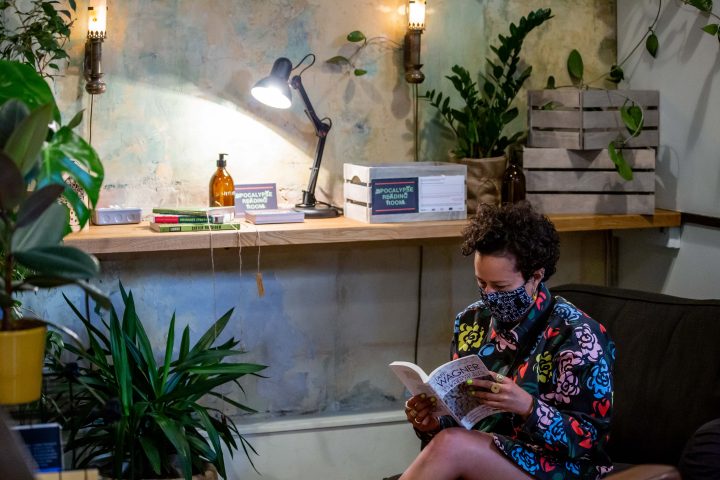 A library curated by Ama Josephine Budge: a world of talking stories in the face of environmental and social transformation. 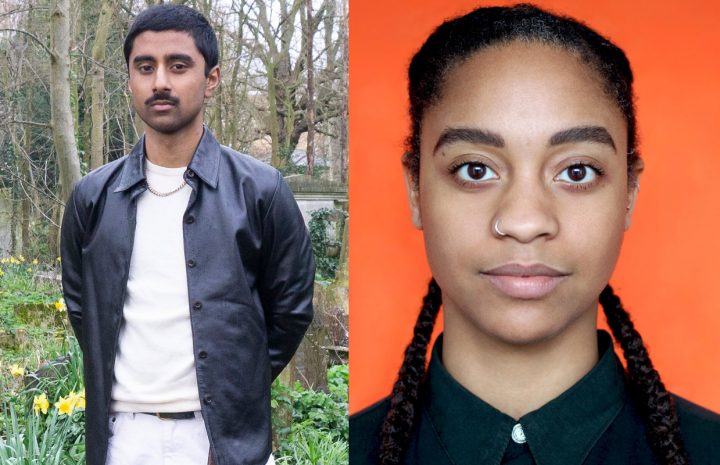 Lateisha Davine Lovelace-Hanson and Mohammed Z Rahman were selected for a three-month residency programme at Artsadmin’s home, Toynbee Studios, where Ama Josephine Budge’s The Apocalypse Reading Room was installed in the Arts Bar & Café from 1 July-30 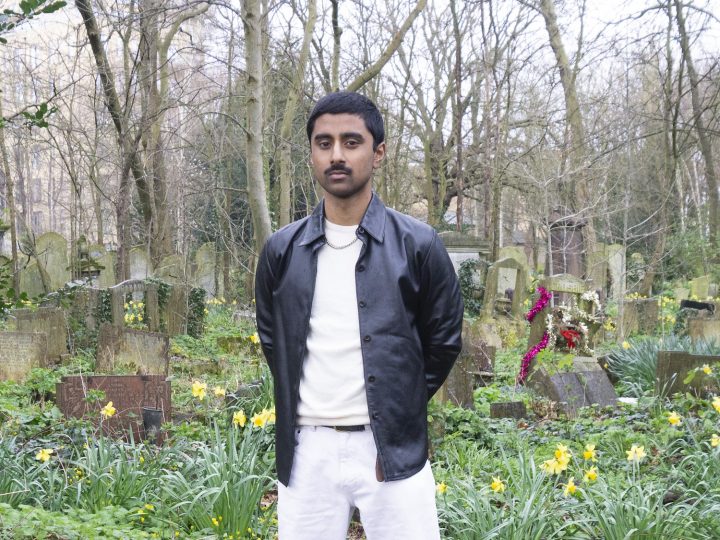 Mohammed Z Rahman is a British-Bengali writer, painter and illustrator based in East 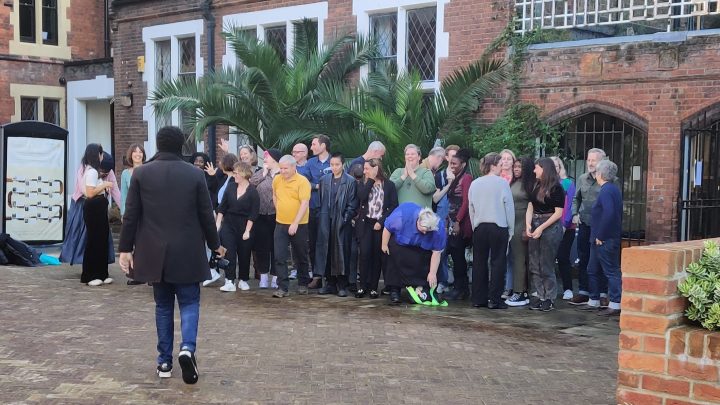