invisible dances… is a period of research that Bock & Vincenzi began in 1999. This time was set up to create a space and process of making work that would allow for experimentation, reflection and re-examination. To allow time to fully develop ideas outside the structure of theatrical presentation.

The one objective of this period was to keep open any idea of what ‘form’ the results of the research might finally take and to allow each block to develop as a continuum of ideas. Each step of the research opened up possibilities and multiplied the potential directions of the next step (backwards and sideward as well as forwards). During this time they worked with over fifty collaborators that included both sighted and visually impaired performers, dancers and actors; artists with physical disabilities, sound and video artists, computer programmers, philosophers, photographers, poets, writers, a phenomenologist academic and a spirit medium. They were drawn from England, Scotland, Norway, Armenia, Belgium and Brazil.

invisible dances… began with nothing and became a meditation on the idea of absence and the representation of absent spaces.

“Observing each of the performers apparently imprisoned in their own internal world, was a moving experience. The moments of communion between the dancers – an accidental mirroring of movements or the slight touch of a guiding hand on the back – were profoundly touching. This is an experiment truly worth watching and one that deserves an audience”

Block 21
5th October – 27th November    invisible dances… from afar
A sound work for telephone with the voice of Fiona Templeton.
Presented in association with Dance Umbrella.

Block 24
14th – 24th April
invisible dances… from afar
A sound work for telephone with the voice of Fiona Templeton.
Presented as part of SpringDance, Utrect.

Frank Bock (performer/choreographer) and Simon Vincenzi (director/designer) have worked together since 1995. Together, through a series of 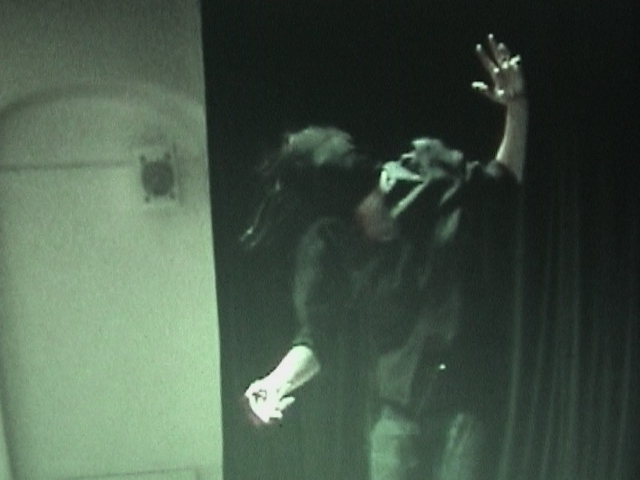