The Right to Queer

Thoughts after DotDotDashDot:Queer – Hana Tait reflects on the processes of putting on a Queer film night.

In the lead up to co-curating ‘DotDotDashDot:Queer’ I met with a friend of mine, a playwright with a history of working with LGBT and politically engaged companies. When I told him I was working on a film event titled ‘Queer in 2011’ he struggled to hide his grimace. He “knew it meant something different now”, he said, it’s just that “growing up it was the very worst word you could hear”. Another friend of mine felt it was ‘inappropriate’ for me to be using the word at all (because I am a female-bodied person in a relationship with a male-bodied person) let alone to use it to express my own identification. Of course I’m not naïve enough to be totally oblivious to the sting that the word ‘queer’ still carries for many people, but suddenly I felt a real weight of responsibility in handling this event. It certainly felt like we were traversing much less steady ground than we had in 2010’s DotDotDashDot:Home.

The event that we were putting together consisted of a screening of Kenneth Anger’s 1947 film ‘Fireworks’, plus four shorts from emerging film makers, each made in the last two years and selected from an open call for films exploring ‘Queer in 2011’. This was to be our third DotDotDashDot event and we looked to use our open call format to test the waters of what ‘queer’ meant to artists and audiences today. We were aware of the sensitive nature of suggesting ‘queer’ as a theme. There have long been tensions in the way that the work of ‘de-centralized’ artists (or any artwork that does not represent the European male-dominated mainstream) is curated and I for one would certainly struggle with viewing the work of, say, women artists or Jewish artists as having some essentialist characteristic in common. By bringing these films together we hoped, not to marginalize them as a niche curiosity, but to explore the perceptions of the word and how it might function as a position or area of enquiry. To compliment the films we created a ‘mind map’ activity inviting audience to add their own ‘Queer’ word associations, and also scheduled in a post-screening discussion to collectively unpack some of the themes we had encountered.

The films that we selected were ‘just a meaning that you attribute to it’ by Bernadette Anzenberger, ‘One’ by Maria Wiecko, ‘Spring’ by Hong Khaou and ‘Meeskeit’ by Neil Ira Needleman. Each approached ‘queer’ from a very different perspective, with forms spanning action-based video art, documentary, dramatic narrative and multi-media story telling. In the post-screening discussion we were asked to talk a little about our decisions in selecting. Each of the films shown had elements addressing either gender, sexuality or both. Absent were explorations of other prominent enquiries in contemporary Queer discourse, such as of normative ability and dif-ability or race and colonization. It was certainly not a decision of ours to discount films that addressed these issues, but the films that we received didn’t explicitly engage in these other forms of ‘Otherness’. That said, many of them completely subverted our expectation and approached themes as diverse as ‘hipster’ posing and Science Fiction-style organ harvesting.

Of course it is extremely difficult to draw the line of what to include when the scope of what could be argued to be a ‘queer’ film is fantastically broad.  Equally whatever we did pick would be read through the lens of the different audience member’s definition of queer. I personally voted to show ‘Meeskeit’ not because it featured a sexual experience between two female-bodied people, but because it subverted my gaze as viewer of the paintings that the film is based around. The film could be seen as an exploration of queer subject matter and as a ‘queering’ of the formal conventions of biographical filmmaking. Ultimately we picked films that we felt could speak for themselves in a meaningful conversation about ‘queer’ rather than require accompanying text, explanation or justification.

The discussion we had after the film screening was very much focused on establishing a criteria for selecting ‘queer’ films. ‘Queer’ is a subjective subject, a personal subject, it is about identities, bodies, relationships, it often cuts through to our very sense of self. And talk about ourselves we did. If I have any small regret for the way that we facilitated that rich and enjoyable discussion it’s that we didn’t talk as much about the films themselves as we no doubt could have done. They are artworks that stand up in their own right, worthy of detailed reflection. But in this article, following the discussion we had that Thursday night, I am thinking about boundaries.

As with the mind map we created for the event it was clear that ‘the view from queer’ looked different to each person who participated in the discussion. Each person had mapped the ground differently and at times it wasn’t clear what or who was ending up underfoot in the ground we navigated. We had to confront the issue of ‘whose word it is anyway?’ and contributors argued thoughtfully, and at times quite passionately, for their own ‘right to queer’. There was a spectrum of those who saw it as a reclamation of the word for and by gay activists, through to those who see it as a broad umbrella term for ‘odd, other, different, de-stabilized, de-centralized, fluid and/or in flux’. And even within the latter broader definition there are differences in sensibility. From my own experience I might suggest that ‘fluidity’ is not always a uniform characteristic – I know many Queer activists with far more defined identities than your average Jo/e who hasn’t given much thought to their presentation and position in the world.

In our very free-moving dialogue we pulled apart who might be included in queer. Amongst those who identified queer as rooted in issues of gender and sexuality we queried whether this was essentially rooted in a gay-straight binary or whether it extends to all sorts of ‘non-normative’ forms of attraction and sexual practice (e.g. power play or autosexual and masturbatory practices). At one point a member of the audience declared herself ‘straight, female and Queer’. This caused some surprise to a few members of the audience, perhaps unaccustomed to the idea of dual heterosexual and queer identities. Though I have no desire to makes assumptions, or put words into the mouth of the audience member who shared this identification with us, I am interested to think about the ways in which they might experience ‘queer’ female identification being that we operate in a society in which ‘female’ presentation and ‘femininity’ are afforded far less status than ‘male’ presentation and ‘masculinity’ regardless of the biological body type of the person who enacts such characteristics. I also reject the idea that relationships comprising a female-bodied person and a male-bodied person are inherently, or essentially, hetero-normative.

When I make this last statement I am thinking of my own relationship and it’s hard not to bring this sort of baggage in to a discussion around the Right to Queer. In our post-screening debate we swung from political objectivity to personal disclosure. Observations about a film’s content could quickly become close to the bone. The personal is, of course, political, but in stepping forward to co-curate this event I didn’t imagine that I would be questioned with “What gender are you?” as one audience member repeatedly asked me despite my obvious discomfort. At one point we broke into sub-debate about the ‘pink triangle versus rainbow flag’, trying to decide which symbol (if any) might better represent our individual identifications. Some felt the rainbow flag was more inclusive, others that it is outdated and ‘hippy-ish’. Some rejected the pink triangle as representing an aggressively singular notion of gay sexuality; some felt excluded by it. And many others were pleased to celebrate the triangle, to reference an LGBT history that we feel part of and that has given us options, in the way that we might mutually respect and revile the trajectory of Women’s Liberation and Feminism.

In all of these discussions we grapple with what our history is. Whether Queer in 2011 is the queer of our forbearers, evolved and updated to speak of our present day experience or whether it is a new radical queer, that we might make here and now, fresh for the future selves that we might imagine into being. Is our use of the word ‘queer’ a form of subversion or of appropriation? A reclamation of the word acknowledging and giving importance to it’s homophobic usage; or the irreverent use of it on our own terms, taking as it’s history the old northern adage ‘there’s nowt as queer as folk’?

For some, such as my friend the LGBT theatre maker, it will always be offensive for queer to loose sight of its ‘gender and sexuality’ roots. For others ‘Queer’ extending into other de-centralized discourses just illustrates a natural common identification between ‘de-centralized Others’. I’m not quite naïve enough to be suggesting that the word’s history of violence and oppression can be completely disregarded or that to do so would cause such hurt to discontinue or disappear. In the introduction for the DotDotDashDot:Queer event programme I wrote “We are interested in how we might develop, not by further solidifying our definition of ‘Queer’, but by opening discussions for the exploration of what it might or could be, not as a fixed state but as a site for possibility.” I simply hope that there is room enough in this discussion for all of us to participate and to find a balance between respecting what has come before and relishing what might lie ahead.

Hana Tait is on Artsadmin’s Youth Board and is currently working on the Possibility Archive. DotDotDashDot:Queer was organised by members of the Artsadmin Youth Board, Jenny Greensted, Carly Halse, Priyesh Mistry and Hana Tait and took place in the Arts Bar & Café in May. The next DotDotDashDot will happen in November. 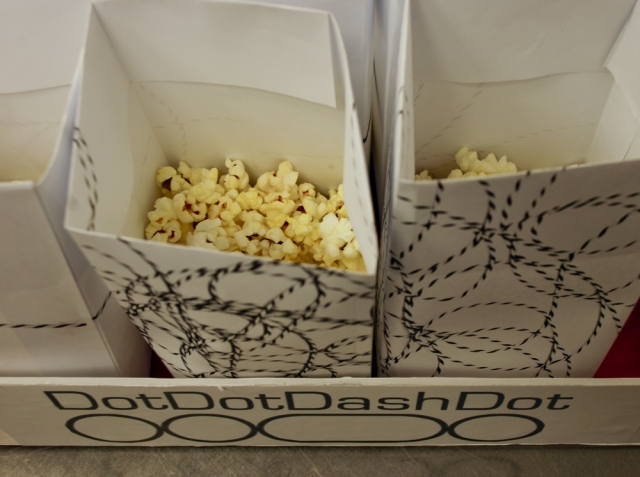 Dot Dot Dash Dot is an evening of films combining the old with the new, it sees three short… 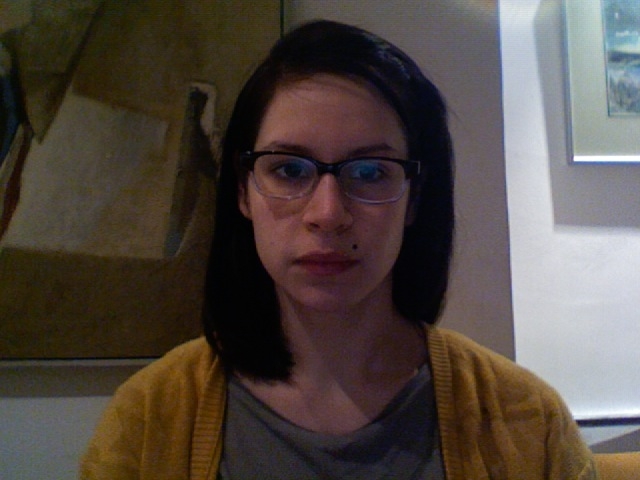 Hana joined the Youth Board after participating in the 2009 Summer School. She has been involved in 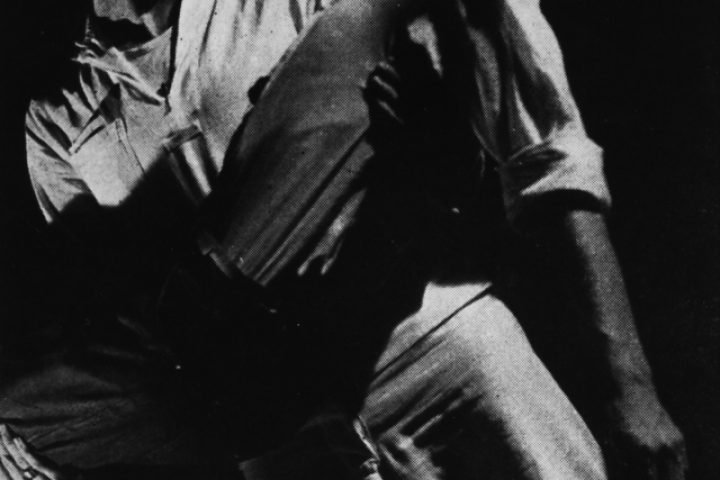