A seminar on the making of A Girl Skipping, accompanied by the screening of a new audio-visual work by ResCen Associate Artist Graeme Miller.

Followed by a drinks reception in the Arts Bar & Café

Re-play gathers together the voices of the original devising performers of the seminal stage work from 1990, A Girl Skipping, recomposed into a faceted and layered piece that analyses and reveals the ideas and processes that informed the making of this work through the filter of 20 years. All the members of the original company, Heather Ackroyd, Emma Bernard, David Coulter, Liz Kettle and Barnaby Stone will be present to participate in a seminar led by John Ashford who first staged the work at The Place Theatre in 1990. The event will be chaired by Professor Christopher Bannerman and hosted by Artsadmin, who first produced the work in 1990.

The launch of the work is accompanied by a newly commissioned essay by Claire Macdonald, Stop Making Sense.

A Girl Skipping’s influence was due in part to its fluid demonstration of actual play as an articulation of the idea of play. Its sense of abandonment and seeming disregard for its audience were part of its eloquence and produced in a charged ensemble process that made itself manifest in its enactment. Re-Play is constructed to delve further into the ethos of the work and techniques that evolved at the time while aiming to retain their ritual, rhythmic and playful essence. It is an audio-work for voices set against a visual track of a slow motion Super-8 stop frame film of the A Girl Skipping. 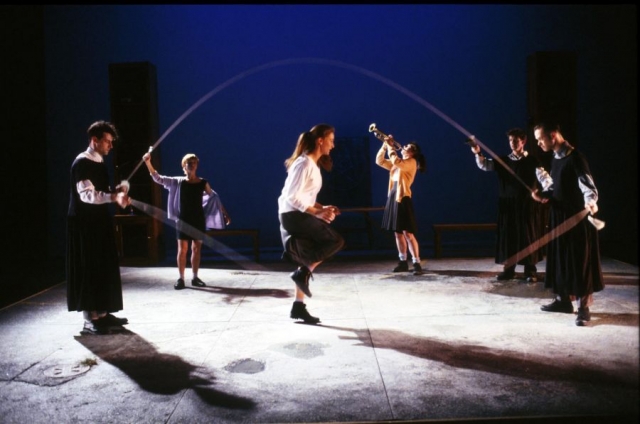 A Girl Skipping was devised and premiered in 1990, and became a seminal work of alternative British Theatre.…