The Skin of My Teeth: written reflection

In 2012 Gill Robertson, an established director of a successful theatre company in Scotland wanted to reflect and respond to where she was in her life and practice and how she was going to move forward. Gill took part in the Summer Project, read her response to taking part in The Skin Of My Teeth.

“Always be afraid but do it anyway”

Mark Storor, 2012 (but also a paraphrase of a very popular self help book)

In August 2012 I joined a twelve strong group of artists to take part in the annual Artsadmin Summer School. This was led by Mark Storor an artist I had worked with briefly before and whose style of theatre making I found inspirational. The only difference between me and the 12 other artists was that their ages ranged between 17-26 and I was 43. They were all at the beginning of their careers while I was slap bang in mid career; a middle aged mum, director of a successful theatre company in Scotland but who had in the past 2 years begun to question whether theatre was her future or whether training to be a painter and decorator would be more satisfying.

I had taken a sabbatical at the beginning of 2012. Not because I knew I needed a break or wanted to retrain but because I had absolutely no idea what to do or how to make my situation better. All I knew was that if continued making theatre I needed to change the way I worked and try to recapture some of the bravery and fearlessness I had when I started working 20 years before.

The sabbatical started with meeting other artists and asking if they had ever felt this way and if so what they had done about it. Of course practically everyone had been stuck; many had thought of giving up and changing career, others took a long break and some just got back into the groove and discovered anew why their work was important to them. I was recommended to jump in and mix up my head with new experiences. And so by the time I arrived in London in August, I had taken part in voice, physical theatre and experimental dance workshops (where I was the only non dancer in the group). I had learned about the viewpoints technique and the voice work of Nadine George and met other artists who I now plan to collaborate with in the future.

But I can honestly say that the Mark Storor Summer School was the key part of me wanting to create again. His particular way of working, his generosity and his belief that every person is creative and their individual responses to the world are valid, allowed me to start creating without judgement and stop worrying if my work was good enough.

During the time I spent at the Summer School I watched all the participants develop and grow in confidence. Every person made something beautiful. And every person changed and became freer, bolder and more adventurous. One young woman who had been exploring her silenced voice journeyed from her home to the Artsadmin office, gagged with a note to hand out in case anyone asked what she was doing. Two women created a powerful image of themselves standing, naked from the waist up, hugging each other in front of an audience, and only the group knew how challenging this had been for them. Another made the most heartbreaking baby puppet out of beetroot stained material and soil and when manipulated became something beautiful, fragile and painful. Everyday day held something extraordinary.

We started every morning with journals in which we reflected on the day before. These journals started politely; small watercolours and writing filled the pages but by the end they were overflowing and untameable. These journals were evidence of the extraordinary creativity that had filled the arts admin building as we held meetings in toilets, filled our space with soil and tomatoes and danced up and down stairs; lovers glued together with smushed tomato dripping from their mouths.

I got up everyday excited with the thought that I was heading to the Artsadmin building. And because of the work we were doing with Mark I was alert to the whole of London; the people and the places, the sounds and the images became everyday poetry to me. And I knew my fascination with the world was a result of Mark teaching us to notice, to look carefully, and to be open to the extraordinary in the ordinary.

I have changed because of this month in Artsadmin. The work I want to make is completely different to what I made before as it comes from a place of exploration and experimentation rather than the tightly bound formulaic work which I was in danger of creating. And what is remarkable is that every participant of the workshop also felt a renewed sense of purpose; a belief that they had the ability to create great work.

This piece is a personal reflection on what I felt and witnessed over the summer and it reaffirms to me the importance of development opportunities for all artists regardless of where they are in their careers. Young artists need an enormous amount of self belief and resilience to make work especially if they are to create work which is fiercely honest and experimental and established artists need to welcome challenges to their working practices and be exposed to new experiences. To be led by Mark Storor and to be working in a space which is alive to possibilities was a real treat and I would forsake every summer holiday with my family to do it again (Please don’t tell my husband and kids).

Watch the film The Skin Of My Teeth: three year reflection 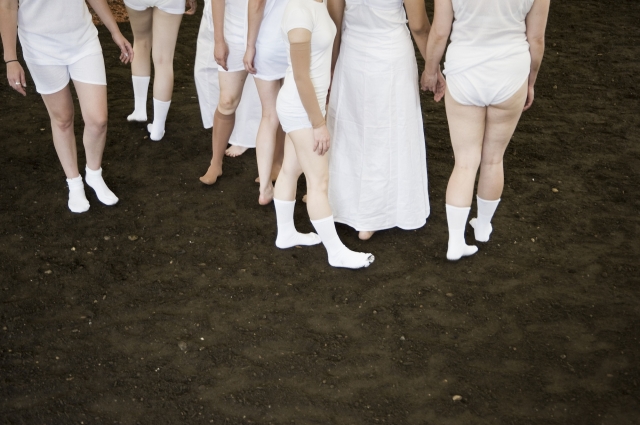 “The Skin Of My Teeth is about constantly wondering whether you just managed it this time, but never…