Buddleia: The Unchained Story is a new feature length documentary film about Lady Unchained, a poet, performer, broadcaster and advocate for life after prison. The film was created by acclaimed filmmaker Tracy Kiryango and commissioned and produced by Artsadmin.

In this blog, Artsadmin’s Engagement Producer Moriam Grillo reflects moments captured in the making of the film.

This image says so much.

It epitomises the journey of becoming for Brenda Birungi aka Lady Unchained.

A moment captured in Holloway prison in the room which was once a prison cell.

To be precise, this, now forgotten and dilapidated space, was the cell where Brenda had spent time during her sentence.

Returning to the space was incredibly poignant.

I watched as Brenda stood in the exact same spot where her bed had been in silence.

I couldn’t help but think how this woman who had come so far, standing in her best garms, had once risen and stood in this spot, again and again, not knowing how she had got there. But, in this present moment, it was clear she had returned knowing who she was and where she was going.

It was a surreal yet transcendent moment that made me feel like she was referring to her past and sending a message to her future self all at the same time.

And it is that notion of a past and a future which epitomises the work she does supporting people with lived experience of the criminal justice system.

Brenda has an infectious ability to invite people to move beyond the constraints they find themselves in and begin to consider a future of their own making.

The conversations she has throughout this documentary, with individuals she has worked with are testimony to that.

Proof of the invaluable work Brenda does in the community and outside of our known communities within prisons.

Working with Brenda to produce this documentary it is clear that she herself encapsulates the work within the work. And that through her own experience she is able to understand, support and acknowledge the plight of others.

This image, taken on our last day of filming, bears testimony to that. It marked a new beginning in Brenda’s own journey. A metamorphosis of kinds which led to creative expression through poetry becoming her own saving grace.

This significant moment in the chapel, in Holloway prison, had been a turning point for her. Where, despite the many things happening around her which were out of her control, she could journey inward and begin to discover her true self.

For this reason, Holloway has come to symbolise the chrysalis in which Lady Unchained was formed. And, like a butterfly, through her work Unchained Nights, she is inviting others to rediscover their own sense of freedom through creative expression.

A butterfly effect in the making!

Join us on 18 November for the return of Unchained Nights, an evening of poetry and music by artists with lived experience of the justice system and the premiere of Buddleia: The Unchained film.

Presented and produced by Artsadmin, with support from BE PART through the Creative Europe programme of the European Union. 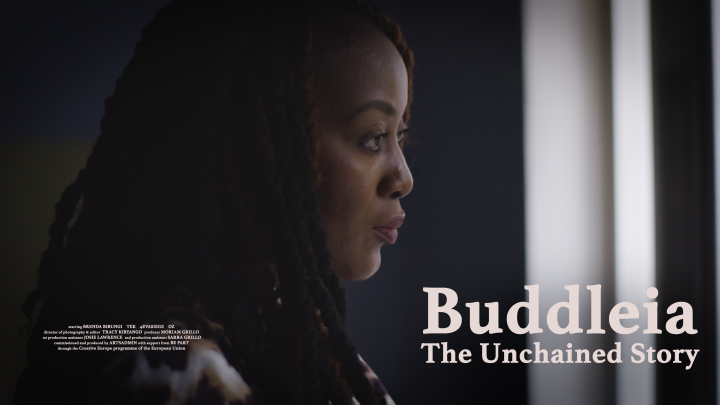 A film that tells the tale of Brenda Birungi, also known as Lady Unchained, a poet, performer, broadcaster and advocate for life after prison