For two weeks, we are sharing Happy Days online, a new video project by Station House Opera, developed during, and about the lockdown. The film is by Ankie Krijbolder and Julian Maynard Smith (Station House Opera), two artists and ex-partners who decided to spend lockdown in joint self-isolation for reasons of health (Ankie, transplant patient) and age (Julian, 70).

Artists Ankie Krijbolder and Julian Maynard Smith (Station House Opera) were joined by Taghrid Choucair-Vizoso, Shubbak Festival’s Senior Programmer & Producer and Station House Opera collaborator, for a conversation about the making of Happy Days. Catch up on the talk below.

A man is in a house on his own during lockdown. He seems insubstantial, transparent, so to compensate he is joined by other versions of himself. There are up to nine people in the house, versions of the same person. There are good things and bad things: fights, bids to escape, hair cuts, clapping for NHS, dancing, self-inflicted torture.

Happy Days evokes a need for companionship and security that is often taken for granted, but also the natural slipperiness of everyday consciousness. It speaks of the need for connection and intimacy at a time when our physical relationships with other humans will constantly be under revision.

Julian Maynard Smith founded Station House Opera in 1980, since then it has had an international reputation for its ground-breaking performance, from large scale site specific performances to intimate theatre and video projects. The company pioneered telematic theatre linking artists and audiences with video streaming between multiple international locations, most recently with At Home in Gaza and London, linking artists in the UK with artists in Gaza, Palestine. The company is also continuing with its long-standing production Dominoes, that connects locations and people across a city with a domino line of falling breeze-blocks.

Ankie Krijbolder did MTS Bouwkunde in Tilburg and studied architecture at St Joost, Academie of Art in Breda in the Netherlands. She worked for various architecture firms including Morphosis in LA. She plays violin in three London orchestras and recently started her own string trio.

She received a living donor kidney from her brother in 2002. Due to her impaired immune system, she was told to shield completely during lockdown. She and Julian separated in 2006 but shielded together during lockdown, when they made this video. 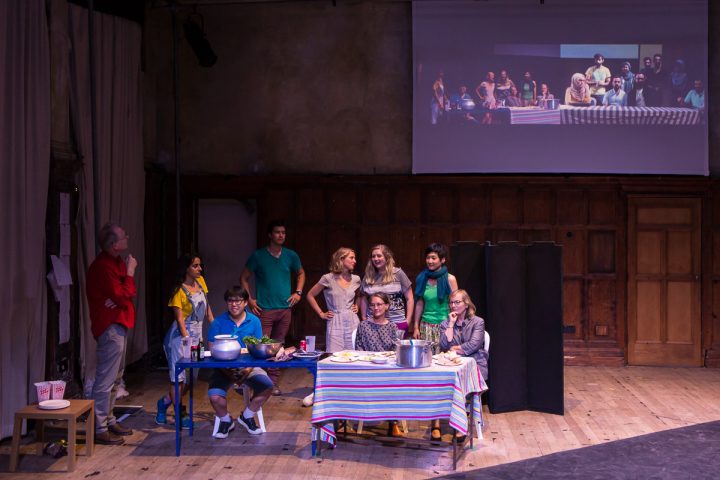 At Home in Gaza and London