Choreographer Rosemary Lee has brought together a cast of dancers from across Scotland and ranging in age from 9-70+ years to create a new site-specific version of her Threaded Fine project.

One after the other, 24 dancers perform the same short solo accompanied by a continually looping song composed by Isaac Lee-Kronick and performed live by Jamie McCarthy. Beginning with the youngest and ending with the eldest, each dancer brings their own unique quality to this repeating, almost ritualistic performance.

Framed by two very particular outdoor locations – the dunes of Findhorn and Magdalen Green in the heart of Dundee – audiences can come and go or stay for the five-hour duration of these two unique presentations.

With its moments of intensity and stillness, Threaded Fine draws on our inescapable connections with space and time and the cyclical rhythms of nature that shape us.

Commissioned by Dance North in partnership with Scottish Dance Theatre and supported by Creative Scotland.

Choreographer Rosemary Lee is based in the UK and known for working in a variety of contexts and media. Over thirty years she has created large-scale site-specific works with cross-generational casts, solos for herself and other performers, video installations and short films. Her work is characterised by an interest in creating a moving portraiture of the performing individuals and communities she brings together, whilst also exploring and highlighting our relationship with our environment.

Over the past 10 years Rosemary has mainly been inspired to make work in outdoor urban and rural locations including: Square Dances (Dance Umbrella) involving 150 performers in four London squares; Under the Vaulted Sky – a promenade work for 80 participants in a cathedral of trees for Milton Keynes International Festival; Liquid Gold is the Air (created with Roswitha Chesher) an award-winning video installation touring cathedrals and galleries; Without, a seven-screen video installation capturing a panoramic view of the city of Derry/Londonderry as hundreds of participants move through the streets; Calling Tree co-directed with Simon Whitehead) which takes place in the canopies of urban trees; and Passage for Par (Groundwork, Cornwall) a durational work for 30 women slowly crossing tidal sands and Circadian (First Light Suffolk), the mother work to Threaded Fine first performed in Malta with ZfinMalta National Dance company of Malta. 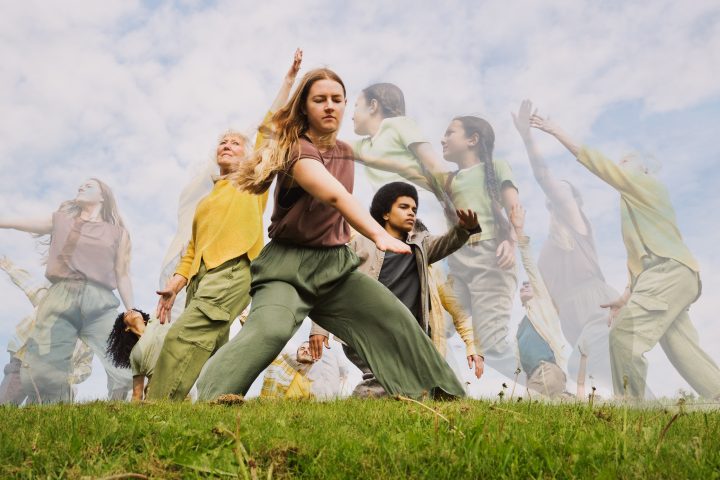 A cast of dancers ranging in age from 9-70+ years create a new site-specific, durational work