PILOT festival: a look back

An ice cube melts flowing out of a discarded oyster shell, a grey candy floss cloud evaporates and a knit coin is spent…

PILOT is an inaugural festival of live and visual art by the sea and took place in Brightlingsea, North Essex over the weekend of 7 and 8 September 2013.

UK coastal areas, mostly in the South, have long traditions of artistic expression and reputations for artistic communities. From the celebrated visual and musical traditions of St. Ives in Cornwall and Aldeburgh in Suffolk to more recent regenerative initiatives such as the Folkestone Triennial (est. 2008); the Whistable Biennial (est. 2006) and the Falmouth Convention (2010). Indeed, the high profile new Turner Contemporary Gallery in Margate (est. 2011) celebrates Turner’s relationship with the town as well as drawing new audiences and business to one of the UK’s most deprived coastal resorts.

Essex boasts a long coastline of over 350 miles with a diverse range of locations from Southend on Sea, Canvey Island, and Burnham on Crouch in the South of the County to Clacton on Sea, Jaywick, Maldon, Mersea Island and Harwich in the North. Over the last two decades, this diversity has attracted a range of commissioned new contemporary art projects from both local and international artists but a regular annual or biennial visual art festival or event has been missing from the Essex calendar.

PILOT 2013 – literally a pilot project – testing the water with the intention to build upon its inaugural year – takes the rich context of Brightlingsea as its starting point.

Brightlingsea is in North East Essex located between Colchester and Clacton on Sea, at the mouth of the River Colne. It is part of the historic confederation of ‘Cinque Ports’ – affiliated through the port of Sandwich, Kent – the network was originally formed for trade and military purposes. Historically, Brightlingsea enjoyed strong shipbuilding and fishing industries and had a railway connection until the 1960s. In 1995, it received national attention when it was selected as a smaller port to export live animals following the ban of transporting livestock from the UK’s larger ports. The sustained and eventually victorious campaign, run by local residents, became known as ‘The Battle of Brightlingsea’. Today, the town has a vibrant recreational boating scene with active contemporary boat building and sail making businesses. Its Harbour anchors pleasure yachts and oyster boats as well as supporting initiatives celebrating the legacy of Essex boat building for future generations including the Colne Smack Preservation Society and the unique work of the Pioneer Sailing Trust.

The PILOT festival showcased the work of seven contemporary artists and included four new commissions. The presentation of live performance work at specified times and ongoing installations celebrated the special nature of Brightlingsea – appealing to first time visitors and residents alike. The choice of work gave an opportunity to explore the town in a range of locations from the ‘Woolybuly wool shop’ on the town’s High Street, the local history Museum and Beach Huts beside the Boating Lake to its celebrated Lido, one of the few open air swimming pools operational in the UK. Interactivity is a consistent element in all of the works from the stunning handmade grey candy floss clouds of Briony Clarke and the gentle guided tours of Amy Sharrocks’ Museum of Water to stereoscopic jewel-like 3D tableaux of Jackie Chettur. The programme offers the right pace of events to both engage with the works and have time to discover the place and its history.

The festival is curated by artist Caroline Wright. Most recently, her established national and international work has taken as its focus places and spaces along the coast, particularly in the East of England. For PILOT, Wright has made a new performative work.

Soundings takes as its starting point an old fathom depth chart, it resonated with Wright as similar to a musical score. Wright took soundings from a small boat out from Brightlingsea Harbour, along the River Colne and out to sea. “…With lead and line I plotted these onto the fathom depth chart and then to the musical stave, using a direct ratio between the axes of time/depth and pitch/tempo-note length, taking middle C as the mid point. An unexpectedly beautiful melody was created, bearing witness to the changing bed of the creek, and the pattern of the tides.”

Taking a row of beach huts as its backdrop the resulting performance work is a powerful narrative of song, sound and visual metaphor. Opening with text from the tide book, the all female cast are dressed in white and blue flag aprons – the ‘Alpha’ nautical symbol, meaning ‘I have a diver down, keep well clear at slow speed.’ We are treated to a series of tableaux, stories through song and text, of sailors and divers, the influence of the moon, the labour of the womenfolk. The work ebbs and flows between land and lake, rope and weight and we are left holding a keepsake of a presented oyster shell with sparkling ice contents.

Do you want a Panini or an edible sculpture? – was overhead in the Coach House Coffee Shop next door to where Briony Clarke was serving her delectable candy floss Clouds. Coming is a new commission from the recent graduate and Essex based Clarke, whose training straddles architecture, design and art. She whips up the ethereal, fragile and strangely beautiful grey candy floss – made with black sugar. Her performative presence has both a grace and an ease that belies the work’s more sinister edge as groups of children are presented with their grey clouds, rather than the conventional pink, and run happily clutching them down to the water’s edge.

Sited in the dramatic and romantic location of Bateman’s Tower Promenade are a series of 3D stereoscopes depicting maritime stories by Jackie Chettur. …it is 89 days this morning since we left the Mumbles Head.. took its original inspiration from the history of the Swansea ‘Cape Horners’ who brought copper ore back from Chile to Wales in the late 1800s. Sited now with a wide horizon line and views of passing Essex Smacks the work has a more universal resonance and gives us the space to make and imagine our own journeys, maritime or otherwise.

Wayne Burrows’ work Marine: A Story in Eight Objects was sited in two locations over the weekend – The Smack Dock on the waterfront and The Brightlingsea Museum. The presentation at two sites served to expand its already fluid and rich meaning. As Burrows states ‘We are all joined by the sea through circulation of goods and people…’ His visual poem combines text and images from specific references to Hawaii and its heritage to the circulation of blood in the human body and charted historic sea voyages. His web of content oscillates between the fictional and non fictional and encourages us to reflect upon how we navigate the past and how this could affect our futures.

Richard DeDomenici is an artist, filmmaker and raconteur. His unique approach to the world is explored using specific contexts and commissions wherever he happens to be in the world from Kendal, Cumbria to Yokohama, Japan. For Brightlingsea, DeDomenici has invented a new currency – Knitcoin – in response to the high proportion of knitters in Brightlingsea and the recent closure of one of its high street banks.

At his new bank’s headquarters – Woolybuly wool shop – we are invited to crochet our way out of the recession by making our own currency as we are ‘time rich and cash poor’. The Knitcoin continues a deceptively simple strand in DeDomenici’s work exploring economic value and specifically currency. His ongoing quest to piece together shredded bank notes (incidentally shredded at the Bank of England’s site in Debden, Essex) invite us to make paper aeroplanes with a currency of our choice. DeDomenici’s accompanying talk explains the provenance of the Knitcoin, his attempts at literal money laundering – an early prototype Knitcoin he put through a laundry cycle in his mum’s washing machine. At Woolybuly we are invited to buy or make our own Knitcoins. Over the weekend the new currency sold in units of one @80p each and were accepted for the value of £1 across the 17 local independent traders who had opted in. DeDomenici’s hope is that Brightlingsea can ‘adopt, reject or expand’ the new currency after its pilot.

If the circulation of a determinedly local currency can engage and potentially transform a community, Amy Sharrocks’s Museum of Water makes us consider our relationship with this universal element at a fundamental level. Part memory, part catalogue, the Museum of Water has travelled around the world requesting donations from a diverse public. In Brightlingsea, the work is sited at The Hard Shelter on the waterside and looks like it has found its natural home, as if it has always been there. We are given impromptu tours by the Museum ‘curators’ of the many and very different receptacles, from a new born baby’s first bath water to rain collected on the day of a woman’s brother’s funeral. We are drawn into other’s lives and implicitly asked to consider ‘this precious liquid and how we use it’, with an open invitation to donate a sample with stories ourselves.

Swimming can be said to be one of our most abiding and obvious pleasures in water, in The Pilot Swim, by Sidelong (artists Abi Cunliffe and Caroline Wright), water is used as a connector in this mass participation event. It took place on the evening of 7 September in the beautifully restored Brightlingsea Lido. The swim was supported by the Outdoor Swimming Society and was in collaboration with underwater photographers. The crowd of willing bathers, across the ages, was given gentle instruction from artists Cunliffe and Wright resplendent in their 1950s bathing attire. The group was choreographed to swim in a circle, wave, dive down and ultimately swim freestyle. The resulting images were presented around the town the following day, capturing a high quality, surreal memory of a unique event.

The weekend attracted a wide audience and was well supported over the two days – the audience looked to be a good balance of artists, local residents and first time visitors to the town. The collection and selection of work for PILOT succeeds in exploring the theme of circulation – physically, economically and socially, it invites us to delve into and experience this multi-layered festival at a number of levels, but more significantly to engage with its very location – the unique site of Brightlingsea, Essex, its past, present and future. 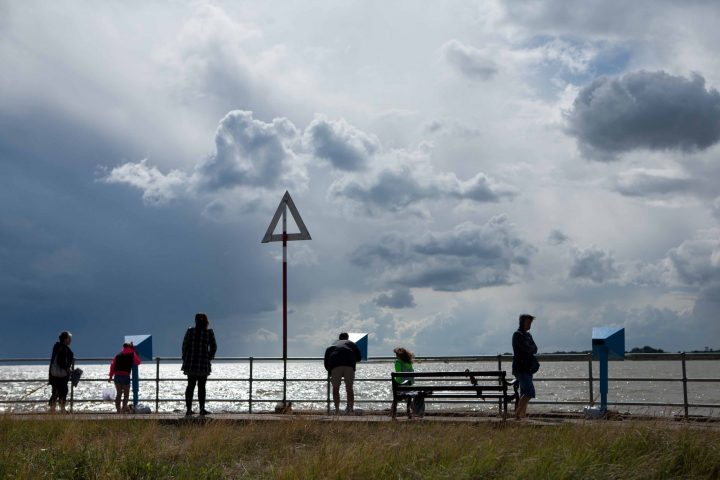 A new festival of live and visual art by the sea 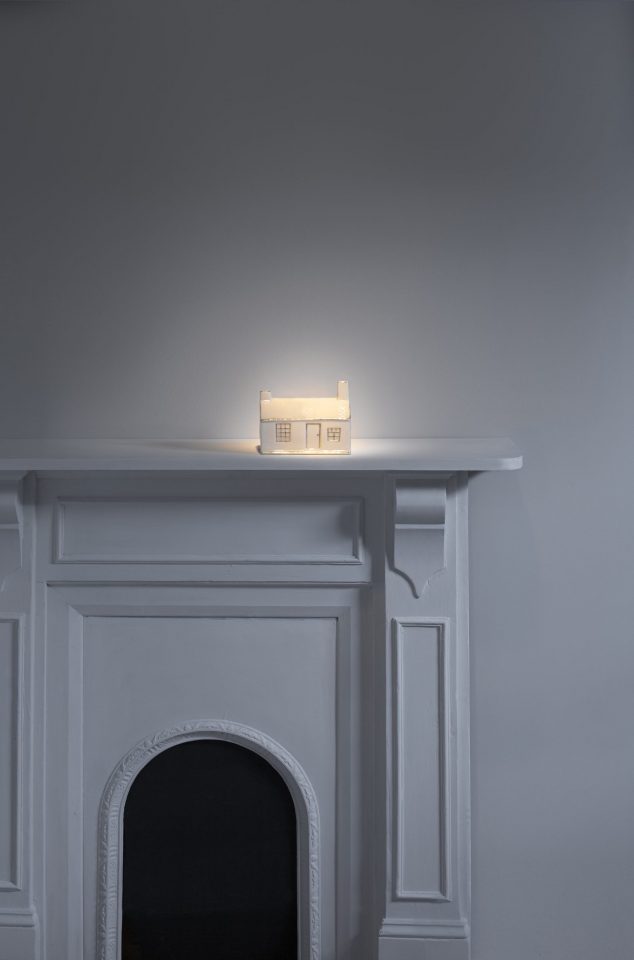 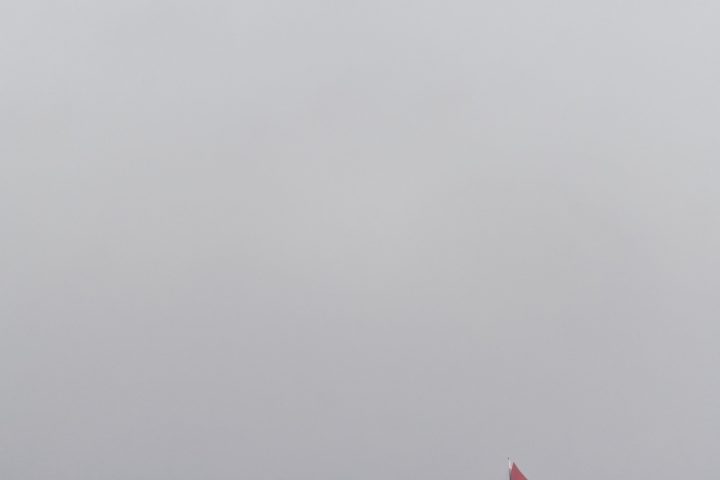 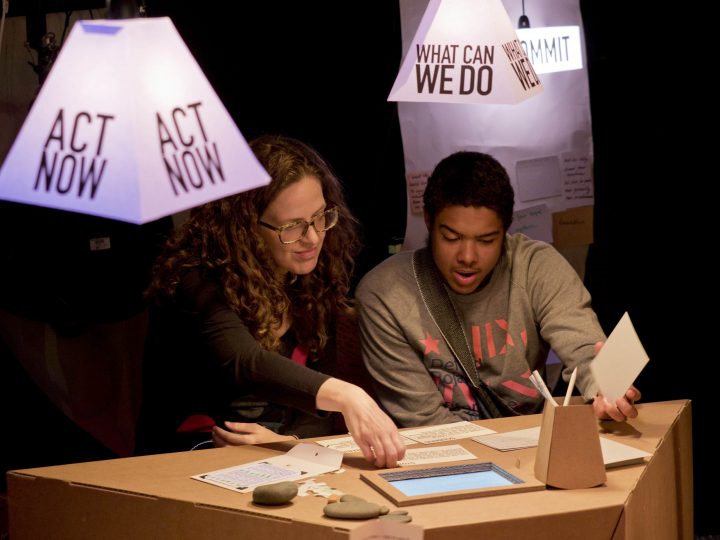