Simon Vincenzi’s Weekender will explore the “act of translation” as part of his ongoing research project Operation Infinity. This will be through an investigation into how the performer can act as a body of translation and how different states of being ‘held’ can happen whilst translating. The lab will focus on physical acts of seeing, speaking and listening and how different texts can inhabit the body of a performer. Questions that might arise during the Weekender include “how can the body be abandoned to the physicality of understanding?” and “what might physical ventriloquism be?” This Weekender is intended for all practicing artists from any discipline, from emerging artists at the beginning of their career to those more highly experienced.

Memory, communication, time, the divided self, consciousness, death and disappearance are recurring themes that develop uncanny, evocative and intensely visceral stage worlds. He frequently develops work through rigorous and intensive periods of research in which the context plays an important role in shaping what is generated. This lab weekend is a unique opportunity to develop your own practice using methods facilitated by Simon, whilst joining him in his own practice-based research.

''Simon Vincenzi is… a radical theatre visionary.''
Time Out

Operation Infinity
Operation Infinity is the title of a body of work that has stemmed from a previous Bock & Vincenzi piece The Infinite Pleasures of the Great Unknown, where six performers played the parts of thousands as the fictional “Troupe Mabuse”. Inspired by two fictional characters – Fritz Lang’s Dr. Mabuse and Shakespeare’s King Lear – the piece follows a never-ending choreography of chaos, possibility and prophecy. Operation Infinity draws on these themes and aims to reconfigure different performances in the same physical space, allowing an audience to use different forms of theatrical interpretation. With the Artsadmin Weekender Simon wishes to explore how the act of translation can affect such relationships with the audience also.

Biography
Simon Vincenzi is a London-based theatre director, choreographer and designer who has created a huge body of work over the past 15 years. Prior to Bock & Vincezi he created the ensemble performance piece Heartless. Then, in 1995 he joined Frank Bock to form Bock & Vincenzi. During their 13-year partnership the duo made works for both adult and children audiences that include Three Forest Dances In A Room Of Wood, Being Barely There I Saw You Too and Breathtaking. In 1999 Bock & Vincenzi began a seven-year research period culminating in The Invisible Dances (2004-2006); a theatre work in three acts presented over three years. During this collaboration Bock & Vincenzi worked with over 50 specialists including both sighted and visually impaired performers, dancers and actors; artists with physical disabilities, sound and video artists, computer programmers, philosophers, poets, writers, a phenomenologist and a spirit medium. Works made for Simon’s evolving project Operation Infinity include: The Infinite Pleasures of the Great Unknown, Club Extinction and Luxuriant.

''As the piece ends in roaring darkness, it’s as if we finally join [the performers]. And you’d be amazed at just what a blast that is.''
The Observer, on As If They Hadn’t Been, As If they Had Not (2005) 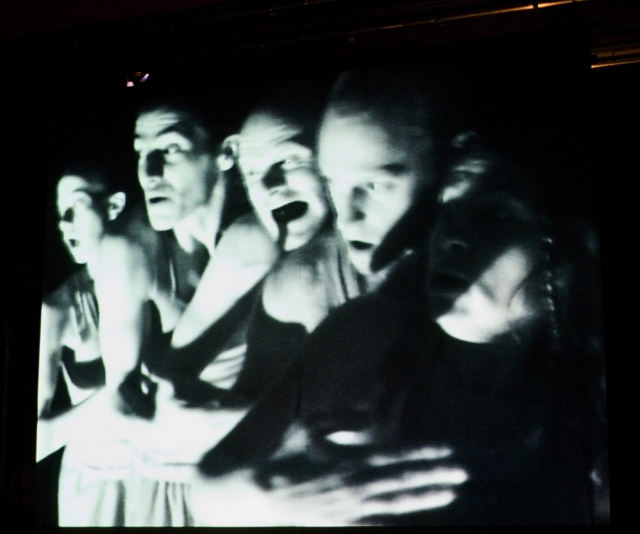 In an empty theatre Operation Infinity install themselves to present The Infinite Pleasures of The Great Unknown. The…