Sinéad Hargan: in my chest and in my bones

Artist Sinéad Hargan took part in Artsadmin’s BANNER programme for recent graduates. She offers insight into her recent work and share a new audio piece in this blog, which is part of our BANNER Showcase Week. Sinéad is in conversation on Thursday 4 February with fellow BANNER artist Shereen Zoumot.

I seem to have gathered a collection of unfinished art projects over the last year – mostly non-committal meanderings – I’ve been struggling to start anything new, and when I do, I desert it halfway though. So, after taking advice from a friend, I decided to take some time to reflect on a past process and performance – possibly because I’m missing live performance so much. I decided to go back to a work I made two years ago. A work that lives in my chest and in my bones.

I Just Go On And On And On was a collaboration with women from the Dundee Gaelic Choir. Combining choral soundscapes, discords, original vocal scores and moving image, this live performance was an experimental reshaping of traditional, female-led laments or keening.

I had been researching wailing women in Scottish and Irish folklore, in particular the Bean Nighe and the Bean Sidhe (Banshee) – mythic omens of death. I was interested in the history that is often at the core of myth and came across keening. Keening is a practice that died out in Scotland and Ireland in the 1950s and 60s.

Keening was a vocal lamentation of mourning the dead, often performed at a wake. Keens are said to have contained raw unearthly emotion, spontaneous song, repeated motifs and wailing. The word keening originates from the Gaelic ‘caoineadh’ meaning crying. Myths of wild wailing women warning of death and disaster were used to villainise women’s voices and rid places of these women-led traditions of mourning.

I think I enjoy the morose and melancholic. Maybe I indulge in sadness a little. These new versions of keening rituals that we created were a way of cathartically indulging in loss, a way to share grief collectively.

This new audio work is an exploration of reflection on past process: on past ritual. I decided to present this work as an audio piece so that you can move, travel or stare out the window while you listen.

I think we all need time to grieve. The last year seems like one long mourning. I want to be in a group of people. I want their voices to go right through me. I want to close my eyes and feel it  in   my   chest    and    in   my   bones

And thanks to sound artist, John Bryden.

This project was made with support from BANNER, a programme co-delivered by Artsadmin, Live Art UK, Goldsmiths and Royal Conservatoire of Scotland. 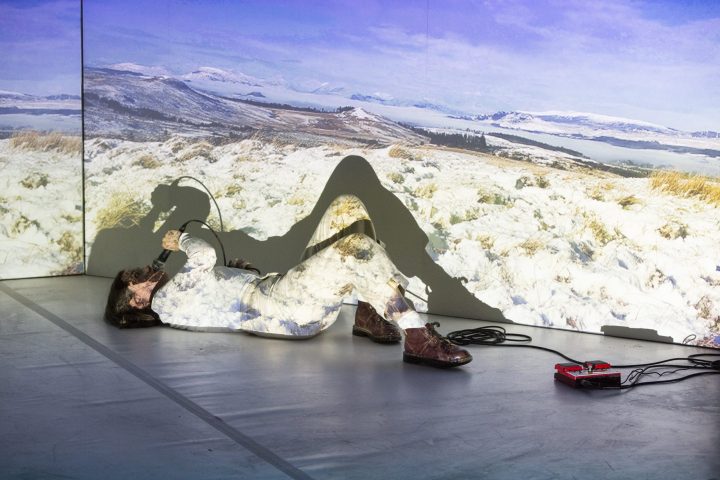 Sinéad Hargan’s work is deeply rooted in the desire to understand the world through materials, the body

Starting Out in a Pandemic