When two million newly disabled British ex-servicemen returned from the First World War, society’s attitudes to disability had to change.

In a series of short films produced by Artsadmin and Xenoki, five contemporary disabled artists present unorthodox, irreverent and unexpected takes on the legacies of war and disability in Britain today.

Does it Matter?
Does it matter?—losing your legs?…
For people will always be kind,
And you need not show that you mind
When the others come in after hunting
To gobble their muffins and eggs.

Does it matter ?—losing your sight?…
There’s such splendid work for the blind;
And people will always be kind,
As you sit on the terrace remembering
And turning your face to the light.

Do they matter?—those dreams from the pit?…
You can drink and forget and be glad,
And people won’t say that you’re mad;
For they’ll know you’ve fought for your country
And no one will worry a bit.

Oh! What a Lovely Lovely Ward by Katherine Araniello turns sentimentality on its head in a playful and absurd reimagining of a wartime hospital. The wounded and war damaged wait their turn to have their morale lifted by Matron while a jolly war song is bashed out on an old piano and a frenzied special effects team tend to the injured.

In Soldiering On, Jez Colborne collaborates with Mind the Gap to explore Jez’s fascination with the pomp and ceremony surrounding war and its brutal reality. A music video set in an old cinema, with Jez performing an original song at an upright piano, it explores his desire to be part of an experience he’s locked out of because “learning-disabled people don’t go to war”.

Claire Cunningham’s Resemblance is a solo performance created around the act of assembling (and disassembling) a crutch in the manner of a soldier assembling his gun. Claire enacts a ritual that mirrors the act of creating a weapon of destruction, while actually creating an object of support.

In Breathe Nothing of Slaughter, Tony Heaton examines the potent symbol of the memorial against the realities of those disabled by the devastating effects of war. Heroic, enduring, Adonis-like bodies waving flags or in prayerful repose are set in stark contrast to archive images of blackened faces, rotting feet, malnourished and broken bodies.

Simon Mckeown’s Ghosts uses motion capture and animation to follow a cast of disabled veterans as they move through a landscape referencing old photographs, filled with the artifacts and objects of war. Dressed in the uniforms of various armies, they wake, rise, dress and prepare for a day in which they must learn new abilities. 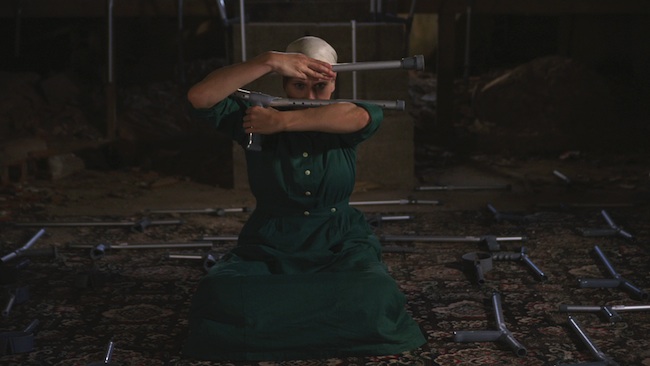