Time to get a haircut before ‘The Party’

In this guest post, Hannah Newell writes about The Haircut Before the Party and the use of urban spaces.

In ‘belonging to everyone and yet no-one in particular’ The Haircut Before The Party’s makeshift salon in East London is in itself is a political act; an opening for discussion, even to question the limits of its own communality.

The city is, according to architect Mohsen Mostafavi, ‘the contested site of difference’1 in which a diverse population of individuals and communities rub shoulders on a daily basis.

This gives the city an energy that draws us to it as a place to work, study and live. The density of population to space, the variety of people, influences and culture and the anonymity of the crowd  all create a sense not only of freedom, but of the ever-present possibility of encounter with the other.

As many of us will have found in the depths of the London Underground or weaving through the throng of people on a crowded high street, urban living can also be crushingly alienating:

“Man and man alone, reduced to a thread…aimlessly wandering in the crowd. Man anxious about man, in terror of man.”

The weight of finding oneself a lone individual in the mass of such a sizable contest for space, representation and opinion, can make one feel a ‘sense of impotence and a loss of identity’3. Our ability to create the city – to have an influence on the spaces around us- becomes impossible when we throw up our defenses and become detached in order to survive it. The space of the city becomes a web of pathways  between points of security: our homes and perhaps our places of work or study. The ascendancy of the private realm over the public has made it harder for us to come together and ‘participate in that communal life we call the city’4.

This clash of private and public space and the merging of the boundaries between them means that an investigation into the use of urban space allows us to ask pertinent questions about the possibilities of communal living. How do we meet? Why, and where do we feel free to do so? What can be collectively achieved? In an improvised hairdressing salon on Toynbee Street, East London, the collective known as The Haircut Before The Party have used ‘the what could be possible factor’ to create a free, open space, the use of which continues to evolve into a more and more complex and ever adapting communal endeavour. Very simply, the salon offers free hair cuts in exchange for participation in discussion. Each month has heralded a new topic and when booking a hair cut online at thehaircutbeforetheparty.net one can propose a discussion point or book for a particular day when someone else has already suggested something of interest. Alternatively, you can simply wander into the salon off the street and hang out, read or talk.

Over the four and a half months that the salon has been running, the space has adapted  according to the needs and ideas of those that have visited. Even the barbers themselves have gained expertise through the same sharing of knowledge. When visiting back in July there was talk of creating a proper reading room from what at the time was simply a few books and leaflets on a table. Now, the impressive communal library contains written works catalogued right from anthropology through to world systems. Not only do they have an excellent collection of physical volumes on radical thought, the collective have also created what they call ‘The David Greaber Knowledge Commons’. This vast collection of books and articles are kept in pdf form that can be printed out and read in the space. This method of sharing written content is put to good use for events such as the upcoming Communist Reading Group which will be exploring the nature of communism on Tuesday nights from the 25th October till the 22nd November.

This flexibility and ability to grow through use  is what makes the salon a ‘space in common’. In contrast, purpose-built public spaces can very easily fail to achieve their designer’s aims. Real loose spaces within a city often occur unexpectedly and without the intervention of urban planners. This only goes to show that rigid public spaces cannot create a community to live within them. One of the salon’s successes resides in its adoption by not only activists and artists, but the city workers of Liverpool Street and the local community. As Lewis Bassett, one part of the collective explains, ‘people know how to enter a salon. It’s a societal need and a personal need’. At the  salon you meet not only those who had heard of the initiative through various arts and activist networks, but many who wandered in out of curiosity. At tipping-out time from the mosque, a group of friends stopped in for a weekly trim and the city boys working nearby finally accepted that the service was free and had stopped trying to force money on the collective.

The essence of offering a free haircut – an idea borne out of necessity whilst living communally in a squat – is openness, trust and free exchange. From this simple idea people have come together to create a place of complex use; a sharing of experience and knowledge that will culminate in a diverse calendar of events over the projects remaining time in situ.

The schedule of events for the next few weeks includes: a night of ‘rabble rousing’ whilst looking back at the student demonstrations at Millbank last year and planning for an anniversary demo; an opportunity to be part of a collective autobiography in ‘Life Lecture’; eat together at a delicious and discursive community dinner, a critical close look at the nature of THCBTP through reading, screenings and performance interventions with Eleanor Weber; and finally, it will be time to show off our new hairdos at THE PARTY, the final event taking place at the end of November.

Such a resource as The Haircut Before The Party’s salon is sadly a very rare occurrence in the city, despite the possibilities of urban space. Truly open spaces are in the minority to the reality of the street, which is predominantly a place of commerce and can feel more privately owned than publicly shared. Through support from independent arts charity Arts Admin and the hard work of Lewis Bassett and Richard Houguez the salon has escaped the need to be profitable and therefore has counteracted  becoming ‘a place of consumption and consumption of place’5. Consequently, this means the space can only be temporary. However, the connections it creates and the work that has and will continue to come of these exchanges will perhaps evolve into further events and spaces. It also poses the question of whether such a space needs to be temporary in order to avoid becoming too rigidly defined, or whether it could continue to evolve indefinitely. If nothing else, in taking the risk of creating a a free open space – even temporarily –  the project gives an example of how we might engage with an urban community we never thought existed. One can only hope that visitors may be able to take that experience forward and create commons of their own in shared living spaces, in universities and work places, and on the streets as well.

Want to know ‘where politics happens in the city?’, then attend an event or debate or even just drop by and enjoy a free haircut whilst engaging in conversation with their hairdresser (and anyone else who happens to be there). The salon is ‘the space that becomes an occasion for discussion, which might become an argument, which might become a revolution’7.

Hannah Newell is an artist and freelance writer working in Oxford. Developing a spatial practice, she is interested in the political and social possibilities of public space. Other writing can be found on her blog: newellposts.wordpress.com

The Haircut Before the Party hosts THE PARTY on 19 October. 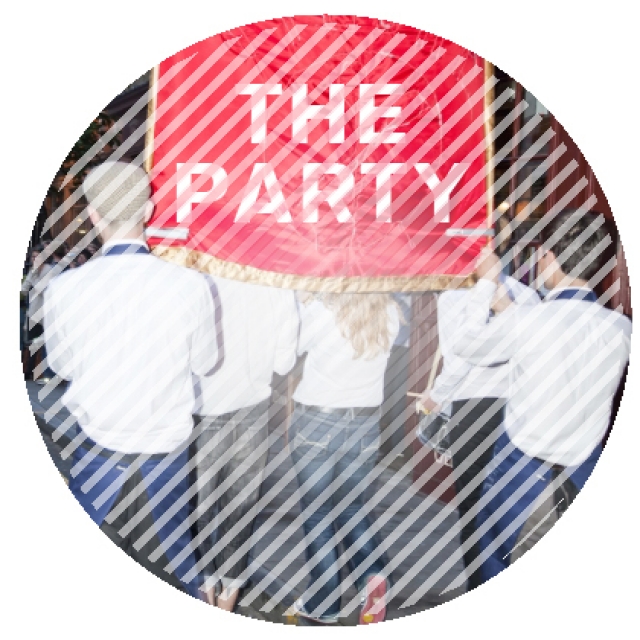 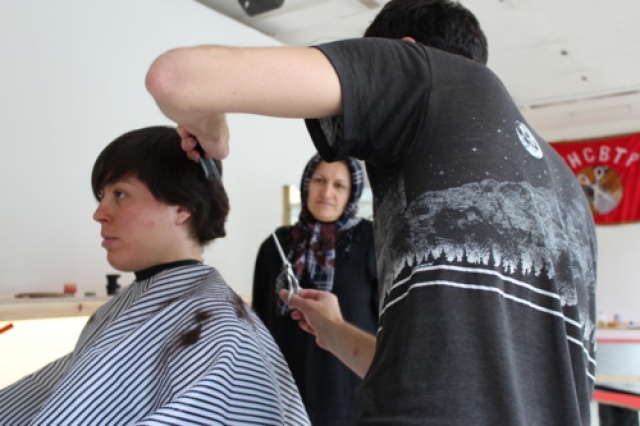 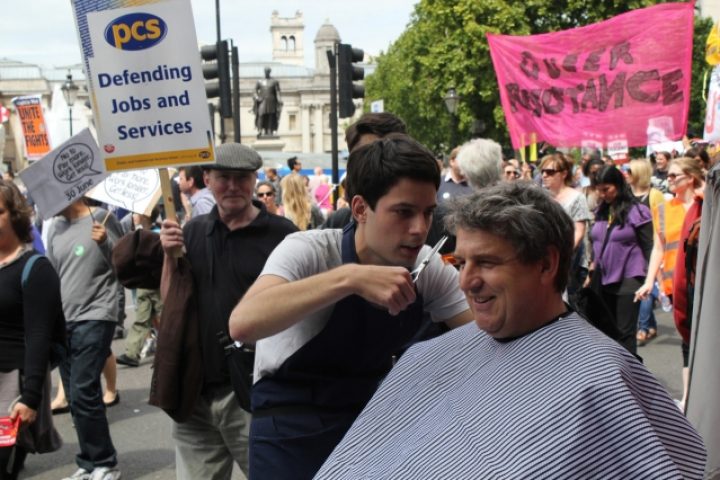 The Haircut Before the Party Salon 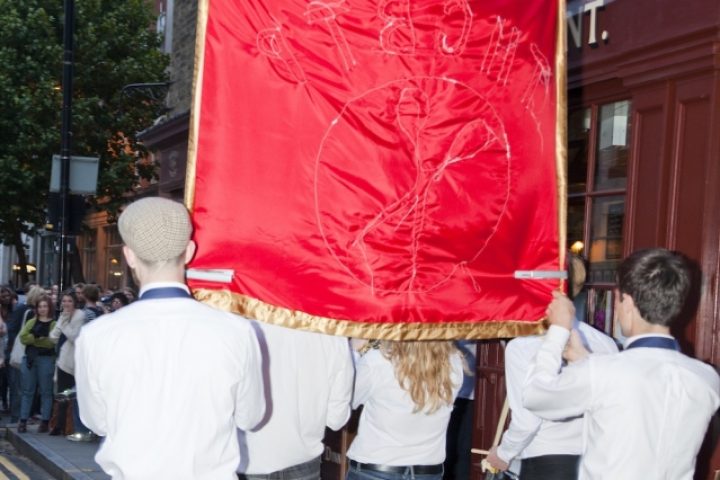 The Haircut Before the Party: THE PARTY: A celebration of six months on Toynbee Street