Stacy Makishi calls herself a “transplant from Hawaii who found paradise in Dalston, London” in 1993. A former comedian, Makishi’s work navigates a range of disciplines, from live art and theatre to visual art and poetry. As artist Joshua Sofaer said of her, she transforms the mundane into the radiant, tackling everything from Hollywood, psychoanalysis to sci-fi, and engaging with both intellectual weight and humour in constructing situations, moments, questions onstage. A particular aspect of her work is an opening up of process through a range of public workshops.

Makishi’s work ranges from participatory performance (And the Stars Down So Close, 2012) to poetry (Around the World In a Lunar Day, 2009) and gallery-based work (Then I fell For You I Fell Like The Bomb, 2010). She plays with authenticity and fiction, weaves together ideas that might seem polar opposites and has developed a particularly slippery identity for her practice. For this year’s Sacred season at Chelsea Theatre, she will be performing her signature piece, The Making of Bull: A True Story, as well as a new piece of work, The Falsettos. I spoke to Stacy to find out a bit more about these pieces, her practice and her own take on interdisciplinarity.

Diana Damian: The Making of Bull: The True Story is based around the Coen Brothers’ Fargo. The film juggles between fake and authentic; it opens with a text informing the audience that this is a film based on real time events that took place in Minnesota in 1987, despite most of the it being a work of fiction. Coen Brothers claim that this association means you have more permission to do things that audiences might not otherwise accept. The Making of Bull engages with these tropes of real and fake, and how we construct truth. Can you tell us a bit about the relationship between the two, and why these subjects were important to you?

Stacy Makishi: I love newspaper articles, urban myths, family secrets and lies. With Bull, it was as true as I could get, ‘Creative truth’, I mean. Here’s what the Coens have said:

“We weren’t interested in that kind of fidelity. The basic events are the same as in the real case, but the characterizations are fully imagined…If an audience believes that something’s based on a real event, it gives you permission to do things they might otherwise not accept.”

I think that the title, The Making of Bull: The True Story gave me enormous liberty to engineer lies and to explore the impossible task of telling a ‘coming out story’ that didn’t want to come out. The only way that an audience will play with you is when they trust you. It’s sort of like Derren Brown, the audiences know they are being duped, they know that he is playing tricks…but they go along with him because they crave magic. Magic is the real truth. And art’s intention is to deepen the mystery.

DD: The main ingredients of The Making of Bull recall a certain genre in American cinema and fiction, but you play with that throughout. How central is the narrative in the story, and how does style come into it?

SM: I weave in and out of genre from thriller, film noir and even slapstick comedy. Images drive the story, not a scripted narrative. I know what it feels to avoid owning one’s story. How can I show an audience my struggle? If this were an image or metaphor, what would it look like? We’re constantly doing things that undermine and sabotage our desires… and when we see a person trying hard to perform two opposing tasks, we recognize our own lives and how we get in our own way. We recognize something painful, funny, contradictory and human. Somewhere inside us says, ‘Yeah, that’s me. ‘

DD: There’s a lot of humour in your work, but authenticity and an engagement with the politics of the mundane are also important ingredients. How do those collide for you?

SM: Humour is very important to me. I worked as a stand-up comic and church was my first initiation into theatre. I want audiences to experience a complicated laughter…Laughter that that comes out of your body because it suddenly feels the need to release a human sound in public.

Humour is a great device because it opens a person up to expressing feelings that are uncomfortable or even terrifying to experience. It reminds me of when I saw Greenaway’s The Cook, The Thief… My eyes opened up to such beauty. The furniture, the colors, the design, the costumes were all so exquisite, and then suddenly there was a scene with a guy forced to eat dog shit. My eyes were set up! He dilated my eyes to take in beauty and then assaulted me with something abject.

I like to use humour in this way. I like to open up your heart and then stretch it further to encounter another emotion, like loss or terror.

I do like using what’s mundane, everyday objects that you come across in your house. I suppose it’s what art does; it makes you see something familiar in a foreign way. Maybe this is what brought a person from Hawaii to Hackney. I feel that foreign feeling every day and the homesickness drives me to create.

DD: The performance returns to Chelsea after having been performed there back in 2010. How has the show, or you, changed in that period of time? What remains in a show like this?

SM: I don’t know how much has changed to be honest. I think that my shows might seem quite impromptu, but they are carefully engineered and scored. Everything I do is intentional, down to the smallest gesture of touching my lips when I drink a glass of wine. It’s crafted but there’s some space for reacting in the moment to the audience, to the incidental and accidental. For me, structure gives me freedom to engage with the moment. I sense that this is where my performances are headed. I want moments of improvisation and moments that are finely constructed and deliberate.

DD: The Falsettos, your new show, is presented as a loose sequel to The Making of Bull. There’s plenty of pop culture references in there, from The Sopranos, to ET and Barbra Streisand. Can you tell us about the relationship between those two performances, and what’s at the centre of the show for you?

SM: Yes, I love using pop culture and Hollywood. I guess you don’t often get to see someone who looks like me in a series like the Sopranos. I mean, can you imagine a five foot tall girl from Honolulu playing a mobster? And why not? I want to challenge people’s perception about danger, violence, love, sexuality and age. I suppose both shows are mysteries. All the facts in The Falsettos are true. My mother does live at Punahou Circle in the apartment where Barack Obama was born and raised. There are so many true facts in this show, it could blow someone’s mind! That’s why I’m also working with a documentary filmmaker, Claire Nolan, on the making of the Falsettos.

DD: An aspect of The Falsettos is a loose examination of the question of artistic identity and vision, and how this gets translated and developed.

SM: I believe that each work comes into this world with its own distinctive ‘identity’ Seriously, all I can do is listen and help it grow into itself. I feel quite passive in the process. I wake at 5am, ready to scribe and to do what is necessary, but in the end, the work is boss. This show is a mystery and the end did not come to me until a few days before we open. The breakthrough came to me in a dream. And I’ve been busy writing the show ever since. It’s interesting because the show is about menopause, and the feeling of being chased by life… that time is running out and that maybe you’re too late.

DD: What’s been the most surprising part of your process of making the show? What do these words mean for an artist working in performance that appropriates so many other tropes and disciplines in the process?

SM: The making of this show has nearly killed me. I’m deliberately setting out to make this new show in a different way – I have a couple of favourite motifs in there but am resisting recycling too much! Seriously, I’m whacked. The ending came to me when I was awake at 3am! There’s something addictive about making work – and I hope some of this compulsion transmits to the audience. When we first began to ‘make’, I suggested that we make before we feel ready. I also didn’t want us to get too stuck into ‘research’ because I know how addictive this part of the process can be… we want to make art, but the feeling is so great that we feel we need to numb the feeling by doing research. We convince ourselves that first we need to do more, get more, know more… then we will be ready. But I’ve learned that there is great vitality when we jump before we’re ready.

DD: You went from comedy to performance, from Hawaii to London. How does your personal narrative inform your work, in the case of both Making of Bull and Falsettos?

SM: I think we make our work from what we have. It’s a great assumption to believe that our lives might speak to someone else but that’s the risk I take. I’m 50 years old now. My life weighs more than I do…. Some of it is pretty funny… slightly tainted and frayed around the edges. I’ve come from comedy and storytelling and now I do live art and performance. I try to use all the things I’ve learned to show you a glimpse of your own life and experience. That’s what I love about London. There are so many different kinds of approaches to art out there. We’ve got one guy who bleeds, another woman who will use dance. Some use poetry, others never speak. Some people call themselves live artists, others contemporary theatre practitioners. It’s all artists trying to make you feel and change.

DD: In your work, you’ve tackled Japanese sci-fi, tragedy, Jung and the politics of language. What remains constant in your explorations? How do you find the form of the piece, and what’s your process? Does it differ every time?

SM: As I said, the work always informs the process. Each project has its own way, its own identity. I try not to ‘tell it’ and allow it to tell me. It’s very hard to listen when you have a deadline or a budget or a reputation to produce one kind of work. But the listening part is most important. You can tell when you are desperate and imposing something onto the work. The work feels embarrassed and turns away. It’s important to remain attuned to the work and what it wants to say.

SM: I think all of my performances are absurd. I think it comes from my sense of belief. I believe and therefore I’m absurd. I don’t know what I believe in… but I do so with my whole heart.

I don’t know if my work is surreal but my understanding of surrealism is that it’s almost real. You recognize something familiar and yet it comes back to you, foreign. An image is imbued with a ticklish memory or a queer arousal and your body feels a rush of blood, like a violent blush. 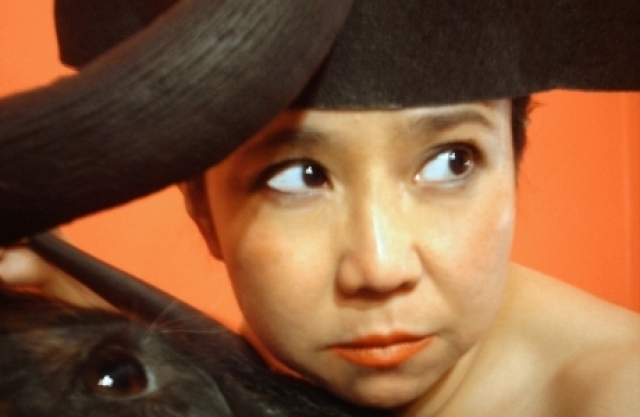 Stacy Makishi’s solo show, The Making of Bull: The True Story, is inspired by the Coen brothers’ film… 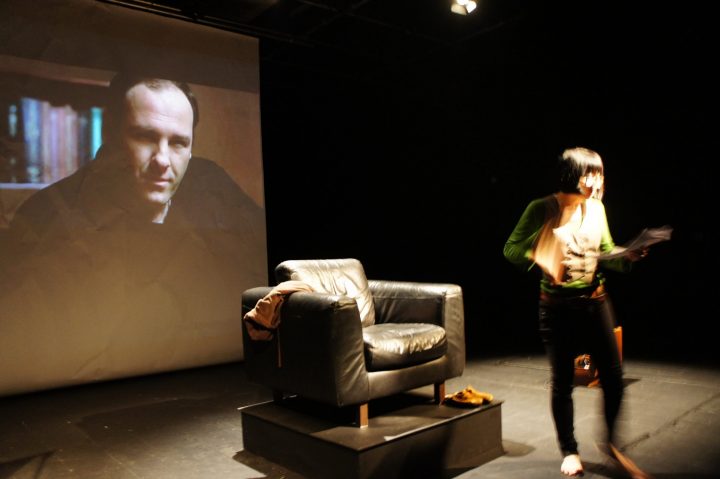 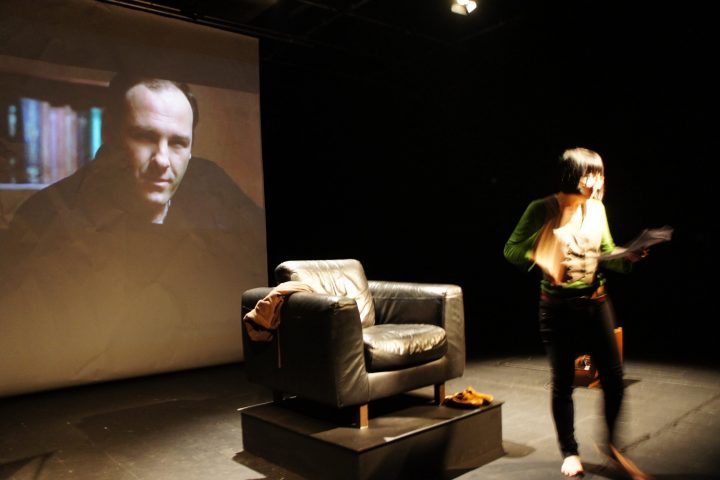