C.R.A.S.H Culture was eight Postcapitalist interventions which transformed lunchtime in the City of London.

Severed Heads by David Fryer
Continuing the English tradition of displaying severed heads of traitors on London Bridge, David Fryer created effigies made from clay, wax, hair, and the severed necks of sheep which were impaled on steel spikes. The heads represented bankers from RBS and HBOS who made their apologies to the select committee, Lord Stevenson, Sir Tom McKillop, Andy Hornby, Sir Fred Goodwin. The heads as is traditional were covered with tar to preserve them.

G is for Gluttony by Rebecca Beinart
Rebecca Beinart spent four days traversing the City with a mobile kitchen on a bike trailer, cooking foraged food from the urban wilds. She searched for edible plants as she followed circuitous routes around the square mile, asking how far you need to go from the financial district to find life. G is for Gluttony played with notions of greed and abundance, revealing how one of the financially richest areas in the world could be one of the poorest in terms of the sustenance it provides.

BANKSPEAK by What Next? Anonymous
BANKSPEAK was the ‘City chapter of Capitalists Anonymous’, a fellowship of bankers, ex-bankers, climate activists, artists, service industry workers and other interested parties who attended a one hour lunchtime session at a city location and were given the opportunity to “confess their capitalist tendencies” to the group in a closed supportive environment.

BOGOF (Buy One Get One Free) by Fe AdLib Kolektiv
BOGOF was the closing down sale of Mark-It & Sons, a capitalist venture that had been trading women for centuries. Real women were stacked on shelves and in basement bargain bins. The shop included all models fit for commodification within the patriarchal system: most fully exploitable inside and outside the home. This buy-one-get-one-free closing down sale marked the end of capitalism and the beginning of a post-capitalist world where no-one can be bought and value doesn’t have a £ sign on its head.

Rabbithole radio by Daniel Jenatsch and Anja Kanngieser
Imagining a time in the future where centralised channels of information and communication have been cut, Rabbithole Radio taught participants how to build and use their own simple FM micro radio transmitter, AM transmitter and AM receiver out of everyday materials.

Eat Gold by Enrico Centonze and Anke Trojan
Throughout the Square Mile, the artists stopped at significant banks, buildings and institutions associated with the financial crash, giving away free soup with 23 Carat gold inside and inviting City workers to discover what it feels like to be of “real value”. As they travelled they asked: What feelings towards our economical system are being expressed by eating gold? How does eating gold make you feel? Do you feel you are of more value? What do you value? 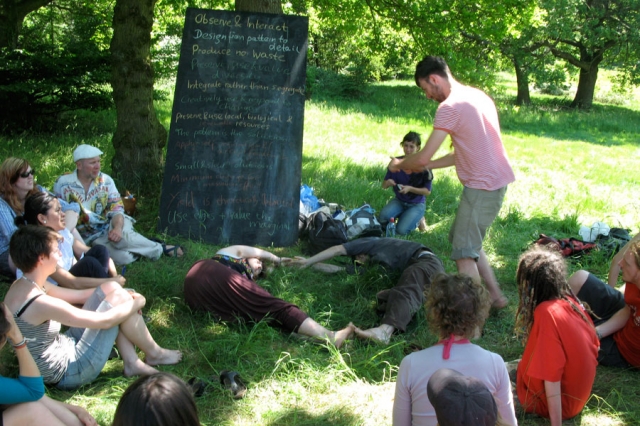